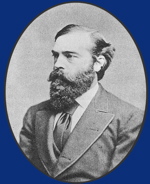 Arthur Williams Wright, for whom Wright Lab is named, held the first Ph.D. in science awarded in the New World. His doctoral dissertation–on satellite mechanics–was one of three accepted by Yale University for the degree in 1861.

Dr. Wright was born in 1836 in Lebanon, Connecticut and received his B.A. degree in 1859.  From 1863 to 1868 he taught Latin and then Physics at Yale, returning in 1872 as Professor of Molecular Physics and Chemistry (later changed to Experimental Physics) until his death, in New Haven, in 1915.

Dr. Wright pioneered in many different areas of research in physics and astronomy. He developed the glow discharge preparation of reflecting optics and used these extensively in the first studies of polarization of the solar corona. He first discovered the occurrence of gases in stony meteorites and subjected them to extensive chemical and spectroscopic investigation. Immediately following the discovery of X-radiation, he was the first American to produce and the first to utilize this radiation in his analytic studies.