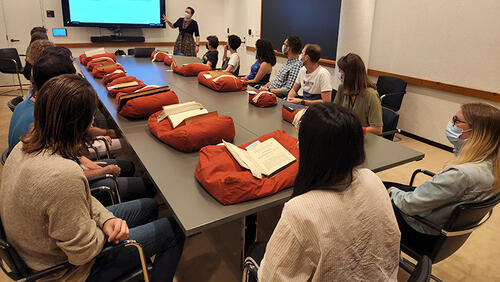 Yale University’s Beinecke Rare Book & Manuscript Library (Beinecke) and the Medical Historical Library together house early editions of many milestones of achievements in physics, including those from Copernicus, du Châtelet, Galileo, Kepler, Newton, and other scientists from the 16th-18th centuries, with topics ranging from early materials science, astronomy and cosmology, physics, and mathematics.

The program was held in a classroom at the Beinecke, and was curated and led by Science Research Support Librarian Kayleigh Bohémier.  The 15 works were by the following authors:

Pictures of the enrichment session can be seen on our Flickr page here.