On Friday, April 26, 2019, artists and scientists convened at Wright Lab to participate in the Yale Subatomic Particle Visualization Contest.  The objective of the half-day-long competition was for teams of artists and scientists to work together to create a conceptual model of a subatomic particle, and realize it in either two- or three-dimensional format using materials provided for the competition.  The particle chosen for this year’s competition was the neutrino - a particle that is not only invisible, but it is also not able to be directly detected and not completely understood in the context of standard models of physics.

Next, a panel of Wright Lab scientists including the Horace D. Taft Associate Professor of Physics Sarah Demers, Assistant Professor of Physics David Moore and Associate Research Scientist Thomas Langford, discussed the neutrino in terms of its properties, motion, how it can be detected, and other concepts that were useful for the contest goals.  The panel was moderated by Misenti.

Misenti then explained the contest format and timeline, and introduced the two judges for the contest, Ágnes Mócsy, professor of Physics and Astronomy at the Pratt Institute and a visiting Yale Presidential Fellow in residence at Wright Lab this year, and Fleischmann.

The teams then split into three different pre-assigned groups of five people each, and separated into each of the two meeting rooms at Wright Lab and the break room.  Each team had two coaches from Wright Lab and an artist among them.

The teams had two hours to design and complete their projects.  At 11:30 a.m., the teams brought their finished visualizations to the Wright Lab WL-216 meeting room and gave brief presentations about their work to each other and to other Wright Lab and Physics Department community members who had been invited to attend the presentations and vote for a “People’s Award”.

The judges convened and chose Group 2 as the winner of the “Judge’s Award” for their stop-motion claymation video “Inverse Beta De-Clay”.  The same group was awarded the “People’s Award”. 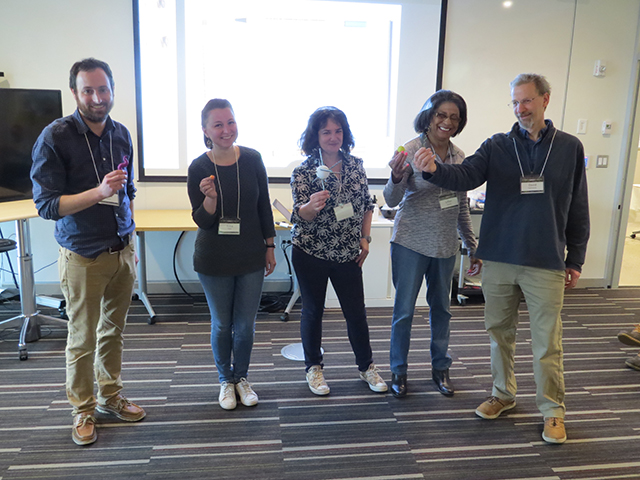 The other submissions were:

Group 1: “A Neutrino Has Many Faces,” performative art that included a member of the group in a lab coat with a neutrino symbol on it switching masks that the group had created for the project to the theme song of Game of Thrones; each mask represented one of three different flavors: sweet, salty or spicy. 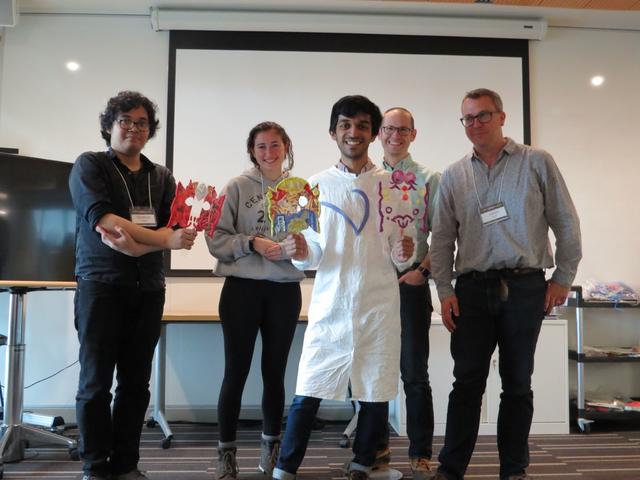 Group 3: a static sculpture called “Soup to Neutrinos” which, as the group explained it, featured a section of chaos and a more stable “ghostly” neutrino standing apart from it. 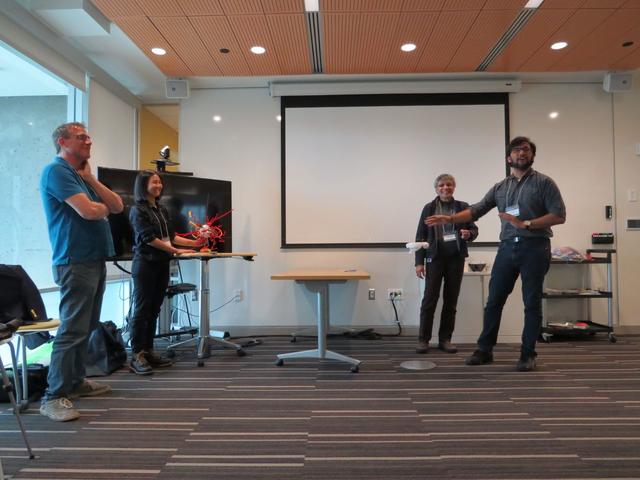 The static submissions, as well as the characters for the stop motion film, are currently on display in the Wright Lab business office.  Photographs of the day and the final submissions can be found on our Flickr page here.