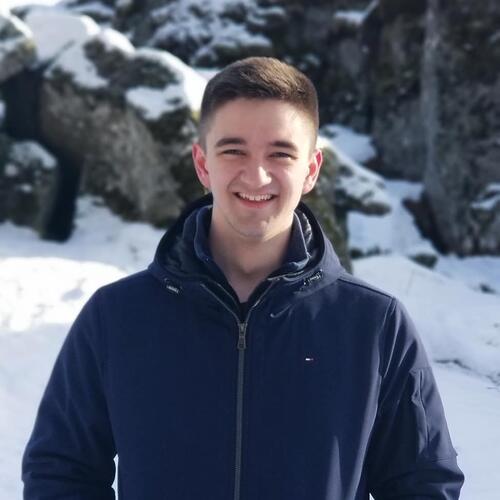 Alex Lathem, ‘21, who has done research at Wright Lab with both Eugene Higgins professor of physics and of astronomy Charles Baltay and assistant professor David Moore, was recently featured in the Yale Society of Physics Students’ newsletter.  See below for the full text.

Tell us a little bit about yourself

I’m a senior in Timothy Dwight College who is originally from Northeast Ohio. I come from a family that really loves science - we took a road trip just to see the total solar eclipse in the US back in 2017. Aside from academics, I also think of myself as a music nerd, having played trombone for 10 years and having done a cappella music since the beginning of high school. I enjoy listening to audiobooks and podcasts, especially ones about history.

What are the exciting research projects or other activities you have done at Yale?

I’ve been involved with three research projects at Yale. In my first spring semester, I worked on analyzing a piece of the DESI Fiberview system, which is a calibration system for a ground-based Dark Energy Survey telescope in the US. The following summer, I worked on computer analysis of Type Ia supernova images. This year, I’m doing research at Moore Lab for the nEXO collaboration. The project is an investigation on the outgassing process for electronegative molecules like oxygen and nitrogen, which can interfere with the signal strength of electrons captured by the nEXO instrument as it searches for neutrinoless double-beta decay. Outside of Yale, I also worked for a summer and semester at UC Berkeley under the Renewable and Alternative Energy Laboratory on the SWITCH project, which is a time- and space- dependent power grid expansion planner designed to help policy makers shift electrical grids towards renewables as cost-effectively as possible.

I’ve never broken a bone, and only ever dislocated one when I was two years old (and was literally on the front lawn of a hospital).

I have a collection of some of the lowest-value coins around the world (e.g. a 1/2-cent coin from South Africa, a 25-fil coin from the UAE). I can only imagine what went through the minds of the hapless travel guides and clerks as some clueless tourist kept asking them for the cheapest coins available in their country.

When I had the wonderful opportunity to visit South Africa, I was totally floored by the fact that the moon was upside-down since I was in the southern hemisphere. I freaked out and told all my travel companions, who tried their hardest to pretend this was interesting.

What is your favorite remote working spot?

I think the Cross Campus lawn is a pretty nice remote working spot. You can find a nice socially-distant space pretty easily and do some work in the fresh air, but it isn’t very lonely because there are still lots of other people around the lawn.