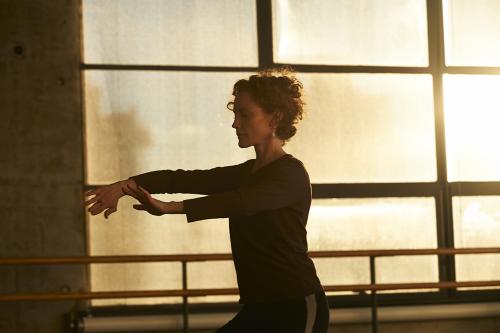 Emily Coates will join Wright Lab as its inaugural artist-in-residence for the 2018-2019 academic year.  Coates is Associate Professor (adjunct) of Theater Studies and the Directing Program, and director of dance studies at Yale University.

While at Wright Lab, Coates will be working on a research project, Moving and Being Moved at the Intersection of Science and Dance, that looks closely at the ways moving and being moved—both literally and imaginatively—contributes to our understanding of our animate and inanimate worlds. Focusing on a variety of sites in which dance artists and scientists collide, she is studying “zones of intensification,” in which knowledge from one discipline interacts with and moves into another.  The research she will do while in residence at Wright Lab and the overarching research project will result in different outcomes, including writing, film, and live performance.

As a professional dancer, choreographer, and writer who has directed the development of dance studies at Yale since 2006, Emily brings to this work a unique foundation in science-art collaboration. For the past seven years, Emily has collaborated with Wright Lab particle physicist Sarah Demers through co-teaching a course and designing public lectures, workshops, and a short film. Their book, titled Physics and Dance, is forthcoming in the fall of 2018 from Yale University Press.

Demers said, “It was clear from my very first meeting with Emily that she would be a formidable collaborator. She has a strong sense of the space that dance can occupy within the academy, and she’s shown me how much a real partnership between art and science—dance and physics in particular—has to offer each discipline. She’s a talented scholar and artist and we’re really lucky at Wright Lab to have the opportunity to benefit from her expertise and engagement with our community.”

Coates became particularly drawn to Wright Lab as a site for her research project when she met Reina Maruyama, an Associate Professor for Physics and Astronomy at Wright Lab, through Yale’s Public Voices Fellowship, a cross-disciplinary program at Yale established with the purpose of  “accelerating ideas and public impact; fostering fellowship around knowledge, meaning and community; and testing what it takes for underrepresented voices (including women) to become influential on a large public scale”.  Coates became interested in Maruyama’s work with dark matter, and particularly the fact that Maruyama is doing experiments in several places all over the world. Through their conversations, Coates was inspired to observe a group of physicists in space, studying how they occupy space and move through space as they experiment.

Coates said, “I became incredibly curious about the ways that physicists engage with and imagine movement in their research, especially when researching the “invisible” realms of the universe, as they do at Wright Lab. I also became interested in trying to articulate more deeply what, exactly, goes on in science and dance exchanges, and the kinds of original knowledge these dialogues, at their best, can produce.  As an artist-in-residence at Wright Lab, I am eager to pursue both of these lines of inquiry in conversation with its community of scientists. I will be learning more about the research that occurs there, with an eye toward the role that choreographic imagination—as we call it in dance—plays in a physics lab.”

Maruyama said, “Emily is a very thoughtful and careful thinker so I am enthusiastic to interact with her and see how she sees as an artist what we do.”  She continued, saying that she is “looking forward to the residency because it is completely new, and every time I have gone outside of my normal boundaries of thinking, even if it isn’t directly related to my research, I get new ideas for how I might carry out an experiment.  There is always an opportunity for learning.”

“At Wright Lab, we are excited to inaugurate our Artist-in-Residence program with the talented Emily Coates,” said Wright Laboratory Director Karsten Heeger.  “Our community of students, staff, and researchers looks forward to collaborating with her and developing new insights into the world through the interaction of art and science. Yale provides a unique environment for interdisciplinary work and we are delighted to be part of it at Wright Lab.”

The Wright Lab Artist-in-Residence program continues the recent tradition of the arts at Wright Lab. Since the decommissioning of the nuclear accelerator in 2013-2015, Wright Lab has been an interaction area for the arts and science. Victoria Montgomery Lee, a former Yale MFA student, used images and parts of the accelerator to create the mobile  “Ideation Accelerator” now on display at Wright Lab. She also assisted with the design of the portal sculpture at Wright Lab. This was the entrance to the former nuclear accelerator and now represents Wright Laboratory’s “Portal to the Universe”.  Other art projects inspired by Wright Laboratory include the light show “Accelerator” developed by Dionysus Cho and Gideon Broshy as part of the Yale LUX event at Beinecke Library. For more information about arts at Wright Lab, see https://wlab.yale.edu/media/arts.

Emily Coates Biography
Over the course of her thirty-year career in dance, Emily Coates has performed worldwide with New York City Ballet, Mikhail Baryshnikov’s White Oak Dance Project, Twyla Tharp, and Yvonne Rainer. Career highlights include dancing three duets with Baryshnikov in works by Mark Morris, Karole Armitage, and Erick Hawkins; principal roles in ballets by George Balanchine and Jerome Robbins; and the breadth of Rainer’s work, from the 1960s to her six 21st century creations. Her solo and collaborative work has been commissioned and presented by Danspace Project, Ballet Memphis, Performa, Carnegie Hall, University of Chicago, Yale University Art Gallery, Wadsworth Atheneum, and Works & Process at the Guggenheim, among other venues. Her fellowships and awards include a grant from the Alfred P. Sloan Foundation in the category Public Understanding of Science, Technology, and Economics (with physicist Sarah Demers), and a fall 2016 Fellowship at the Center for Ballet and the Arts. Her book Physics and Dance, co-written with Demers, is forthcoming from Yale University Press in the fall of 2018. She is an associate professor adjunct in Theater Studies, with a secondary appointment in the Directing Program at Yale School of Drama. Since 2006, she has directed the development of Dance Studies at Yale. She graduated magna cum laude with a BA in English from Yale ’06 and holds an MA in American Studies ’11 GRD. She is currently completing her PhD in American Studies.