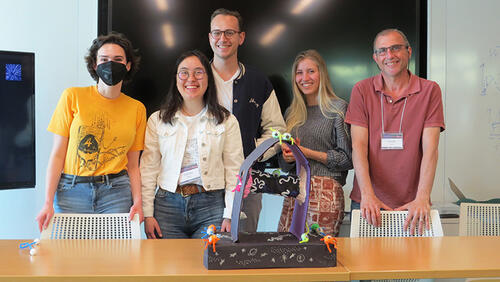 The objective of the half-day-long competition was for teams of artists and scientists to work together to create a conceptual model of a quantum concept, and realize it in either two- or three-dimensional format using materials provided for the competition.   The focus on quantum science this year is due to the fact that the event was part of the programming for Quantum Week at Yale.

The concept chosen for this year’s competition was quantum entanglement, which is one of the many research topics investigated by Wright Lab’s D. Allan Bromley Professor of Physics Keith Baker and his group.

Next, a panel of Wright Lab scientists including graduate students Molly Watts and Jiaxiang Wang and postgraduate associate Claire Laffan discussed the concept of quantum entanglement in terms of its properties, motion, how it can be detected, and other concepts that were useful for the contest goals.  The panel was moderated by Misenti.

Misenti then explained the contest format and timeline.

The teams then split into two groups, and separated into each of the two meeting rooms at Wright Lab.  Each team was a mix of artists and scientists, including some scientists who are also artists.

The teams had an hour-and-a-half to design and complete their projects.  At 3:30 p.m., the teams brought their finished visualizations to the Wright Lab WL-216 meeting room and gave brief presentations about their work to each other and to other Wright Lab and Physics Department community members who had been invited to attend the presentations and vote for a “People’s Award”.

Group 1 produced a static sculpture (see image, above) and was awarded the People’s Award.

Group 2 produced a stop-motion claymation video (see link to video here), and was awarded the Judge’s Award by Fleischmann.

The static sculpture is currently on display in the Wright Lab business office.  Photographs of the day and the final submissions can be found on our Flickr page here.