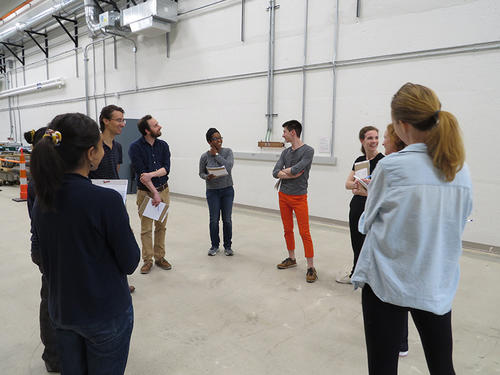 Wright Lab Artist-in-Residence Emily Coates led a second movement workshop for the Wright Lab community on Friday, May 10, 2019 in the Wright Laboratory Vault.  The first workshop of the residency was held on December 7, 2018.

Coates led the ten participants through two “scripts” of movement exercises.  Participants read each script, then followed the prompts within each script, recording their impressions on a notepad.  At the end of each exercise, participants came together and discussed their experiences and observations as a group.

Movement Paradigms in Dance and Physics
at the Wright Laboratory Vault

Using simple movement exercises, we will consider basic principles of choreographic organization, interaction, and complexity drawn from the art of dance. From there, we will move into a conversation about the notable parallels and/or striking differences between the ways the imagining of movement plays out in the physics research undertaken by scientists affiliated with Wright Lab.