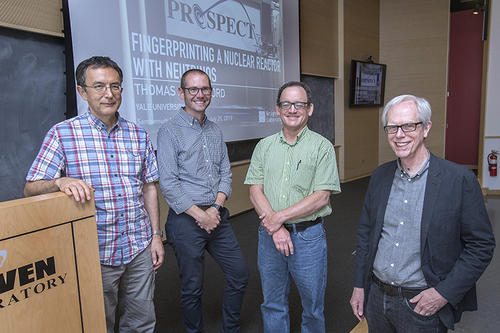 Associate research scientist Thomas Langford was awarded the 2019 Sambamurti Memorial Lectureship at Brookhaven National Laboratory (BNL) on July 25, 2019, where he presented his lecture “Fingerprinting a nuclear reactor with neutrinos”.

According to the BNL website, “the Sambamurti Memorial Lectureship is a prize lectureship established in memory of Aditya Sambamurti, a young high energy experimentalist working on rare kaon decays at the BNL Alternating Gradient Synchrotron (AGS), who died in 1992. It is to be awarded yearly to a young (under 40) high energy or heavy ion experimentalist of outstanding achievement. The lecture, which should describe the work for which the lecturer is being honored, is to be delivered to students working at BNL during the summer.”

The abstract of Langford’s lecture follows:

Neutrinos have been the most consistently surprising particle of the last few decades. The onset of high-precision experiments has lead to the discovery of neutrino oscillations, possible evidence for beyond the Standard Model sterile neutrinos, and the beginnings of neutrino-based geophysics. Recent measurements of antineutrinos from nuclear reactors have observed flux and spectral discrepancies compared to leading theoretical models. Experiments like Daya Bay and PROSPECT are able to observe the small differences of neutrino emission from different mixtures of nuclear fuel, which may illuminate the origin of this disagreement. These neutrino finger-prints can also be used to investigate the mixture of fuel inside an operating reactor, rekindling interest in neutrino-based reactor monitoring. I will present recent advances which have demonstrated how small-scale experiments utilizing new technologies can advance both fundamental and applied science.