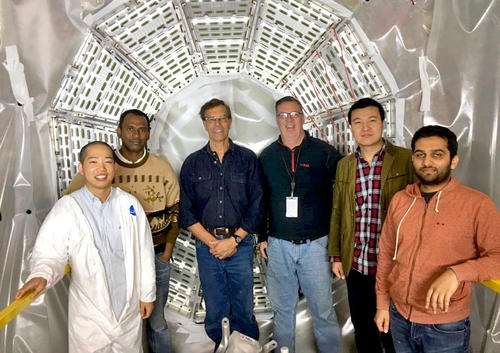 Wright Lab postdoctoral associate Saehansuel Oh was an integral member of the team that tested and installed new sectors for the inner Time Projection Chamber (iTPC) at the STAR experiment on the Relativistic Heavy Ion Collider (RHIC) at Brookhaven National Laboratory (BNL) on Long Island, New York, just in time for this year’s run of collisions at RHIC. The iTPC increases STAR’s ability to capture particles emerging close to the beamline in the “forward” and “rearward” directions, as well as particles with low momentum.

STAR searches for signatures of the formation of ​quark-gluon plasma (QGP), a new state of matter that is predicted by the Standard Model of particle physics to have existed ten millionths of a second after the origin of the Universe, and investigates the behavior of strongly interacting matter at high energy density.  STAR is exploiting the versatility of RHIC by utilizing colliding beams of various nuclei, from protons to heavy ions such as gold, Ruthenium and Zirconium, and varying the energies of the colliding beams to explore the phase diagram of nuclear matter. The goal is to obtain a fundamental understanding of the microscopic structure of interactions of subatomic particles categorized as hadrons, at the level of quarks and gluons, at high energy densities.

Read more about the upgrade in the article linked below.