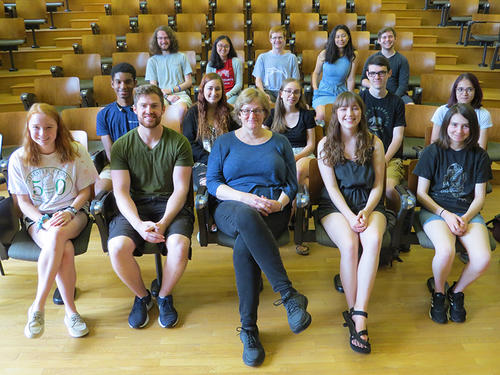 The second annual Granville Academy, a week of diversity and inclusion workshops for undergraduate students doing summer research in astronomy and physics, was held at the Sloane Physics Laboratory during the week of July 15 to 20, 2019.

Designed by Israel Munson professor of physics Meg Urry and former Yale lecturer Louise Edwards as part of their National Science Foundation program on the “Accretion History of Active Galactic Nuclei,”  this year’s Granville Academy was co-hosted by the Yale Center for Astronomy and Astrophysics (YCAA),  Wright Laboratory  (Wright Lab) and the departments of astronomy and physics at Yale.  Wright Lab program manager Victoria Misenti and YCAA senior administrative assistant Geriana van Atta assisted with the logistical coordination of the week.

The workshops were led by Urry, physics graduate student Charles Brown, and associate professor of physics Reina Maruyama.  In a survey taken at the end of the program, the eighteen attendees reported that they had learned a lot and were glad to have participated in this kind of program.

July 15: Introductions, goals for the week (Urry)
July 16: “Demographics of under-representation” (Brown)
July 17: “Fostering inclusivity 1: Implicit bias, stereotype threat, privilege” (Urry)
July 18: “Fostering inclusivity 2: Strategies for dealing with micro-aggressions or implicit bias, how to be a better ally, etc.” (Maruyama)
July 19: “How NOT to give a talk”(Urry), followed by catered lunch and the movie, Hidden Figures