Looking for dark matter in a HAYSTAC — with some quantum squeezing 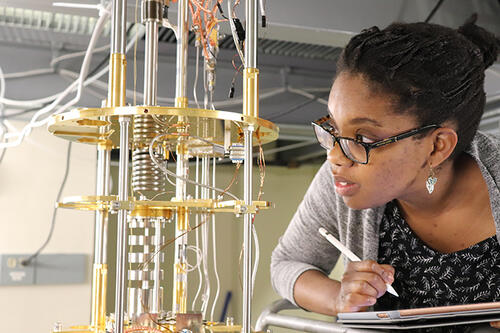 For more than a decade, a collaboration of scientists from Yale, the University of California-Berkeley, and the University of Colorado-Boulder, led by Wright Lab’s professor of physics Steve Lamoreaux and assosciate professor of physics Reina Mauryama, has developed and used the the Haloscope At Yale Sensitive to Axion CDM  (HAYSTAC) experiment to hunt for axions, hypothetical particles that are one of the candidates for the identity of dark matter.

New findings, demonstrated in a study in the journal Nature, led by Wright Lab graduate student Kelly Backes, show that the team has improved the sensitivity of the detector, using a technique known as “quantum squeezing” that reduces the amount of quantum “noise” the axion signal must compete with so the search for the axion can proceed at a faster rate.

“The findings of this paper demonstrate that through the use of quantum measurement techniques it is possible to search for the axion much more quickly than the quantum limited rate,” Backes said. “The tools used in our quantum squeezing setup were initially developed for use in quantum computing labs. The fact that they could also enhance axion detection highlights what is possible when two fields of physics, in this case dark matter detection and quantum information, come together.”

Maruyama noted that HAYSTAC, along with the gravitational wave experiment LIGO, are the only fundamental physics experiments working with noise levels low enough to employ quantum squeezing.

The research was funded, in part, by the National Science Foundation and the Heising-Simons Foundation.

This article was adapted from a Yale News release from February 10, 2021 by Jim Shelton.  For more information, please see the full text of the article, linked below.