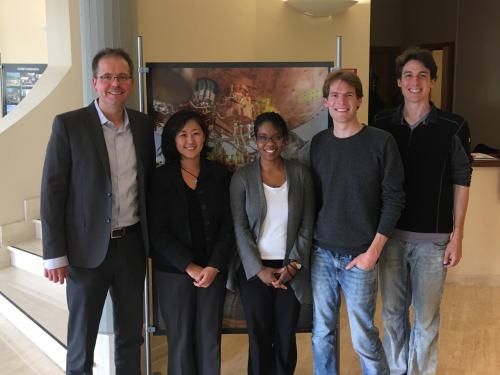 First Results from CUORE: A Search for Lepton Number Violation via 0νββ Decay of 130Te, was published in Physical Review Letters on March 26, 2018.  The publication includes the result of Yale graduate student Jeremy Cushman’s 2018 thesis, A search for neutrinoless double-beta decay in tellurium-130 with CUORE, which “finds no evidence for double-beta decay and sets the world-leading limit on the rate of double-beta decay in 130Te”.  Additional Yale co-authors are Christopher Davis, Karsten Heeger, Kyungeun Lim, Reina Maruyama, and Tom Wise.

With the publication of the CUORE collaboration’s first results, CUORE, an experiment located at the INFN Gran Sasso National Underground Laboratory in Italy that is designed to search for previously undetected neutrinoless double-beta decay in 130Te, joins three other recent experiments (GERDA, also at Gran Sasso in Italy, Majorana at the Sanford Underground Research Facility in the US, and EXO-200 at the Waste Isolation Pilot Plant in the US) in demonstrating “new levels of sensitivity to neutrinoless double-beta decay, a process whose existence would prove that neutrinos are their own antiparticles” (Physics 11, 30).

The CUORE group at Wright Laboratory has been responsible for the design, construction, and commissioning of the CUORE Detector Calibration System, in the analysis and simulation of CUORE and CUORE-0 data, and in research and development for CUPID, the successor to CUORE.  In addition, Professor Reina Maruyama is the Chair of the CUORE Council, Professor Karsten Heeger is on the CUORE Executive Board and graduate students Jeremy Cushman and Christopher Davis are members of the Outreach Board for CUORE.