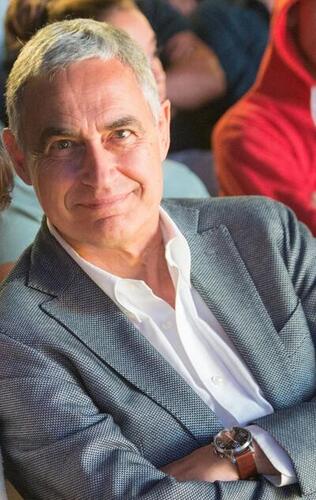 Wright Lab and Yale Physics welcome Antonio Ereditato as a visiting professor in physics, a 3-year joint appointment between Yale and Fermi National Accelerator Laboratory (Fermilab).  Ereditato is also professor Emeritus at the University of Bern.

Ereditato is part of the Yale High Energy Physics Group (HEP), with a research focus in the field of experimental neutrino physics.

He is currently involved in the MicroBooNE and SBND experiments at Fermilab aimed at the search for sterile neutrinos. He has been one of the founders of the DUNE experiment for the high precision study of neutrino oscillations and astroparticle physics. With the Bern group, he contributed to the realization of the near detector of the experiment with the so-called “ArgonCube” liquid argon time projection chamber.

Ereditato earned his Ph.D. at the University Federico II, in Napoli, Italy.  Among other positions, he has served as director of research at the Istituto Nazionale di Fisica Nucleare (INFN) Napoli, as well as ordinary professor of experimental particle physics and director of the Laboratory for High Energy Physics at the University of Bern.

Ereditato has served in several international scientific committees, and is presently member of the PAC of JINR Dubna, of the International Scientific Advisory Committee of the Fermilab Neutrino Physics Center, and of the United States Department of Energy’s (DOE) International Neutrino Council.  He has also been a member of the Swiss National Science Foundation, the Aspen Institute Italia, and president of SAIS (Association of the Italian Academics in Switzerland).

Ereditato is author of more than 1300 scientific publications and of over 40 talks at international conferences, and he is currently Editor-in-Chief of the journal Instruments. He supervised more than 70 master and PhD theses. Ereditato is very active with writing about science for the general public. For these activities, he was awarded the 2017 Caccuri Prize for Literature and Science and the 2017 Maria Antonia Gervasio Prize.

In 2018, Ereditato was awarded the title of Officer of Merit of the Italian Republic.

A full bio of Ereditato can be found on the Yale HEP website.