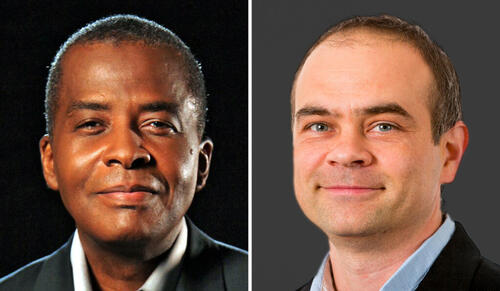 October 13, 2021
The American Physical Society (APS) has elected Wright Lab’s Keith Baker, the D. Allan Bromley Professor of Physics, and research scientist Adrian Gozar as fellows of the society.
APS is a nonprofit membership organization that advances the knowledge of physics and has more than 55,000 members, including physicists in academia, national laboratories, and industry. The society announced the election of more than 150 fellows for 2021 on Oct. 13.
The citation for Baker highlighted his “leadership in the construction of the ATLAS TRT tracker and its use in innovative searches for new physics and new phenomena, including the use of the Higgs [boson] as a probe of the dark sector.”
A particle physicist, Baker’s work contributed to the discovery of the Higgs boson, the last elementary particle predicted in what is known as the Standard Model of particle physics. He has also conducted extensive research for the ATLAS collaboration at the Large Hadron Collider in Geneva, Switzerland.
Gozar, who is affiliated with the Department of Physics and the Energy Sciences Institute at Yale’s West Campus, was honored “for seminal contributions to spectroscopic and transport studies of complex oxides.”
Gozar’s research focuses on surface and interface science, the synthesis and characterization of novel quantum materials, and scanning probe microscopies.

As stated by the APS, “The APS Fellowship Program was created to recognize members who may have made advances in physics through original research and publication, or made significant innovative contributions in the application of physics to science and technology. They may also have made significant contributions to the teaching of physics or service and participation in the activities of the Society. Fellowship is a distinct honor signifying recognition by one’s professional peers. Each year, no more than one half of one percent of the Society’s membership (excluding student members) is recognized by their peers for election to the status of Fellow of the American Physical Society.”

This article has been adapted from a Yale News article by Jim Shelton.