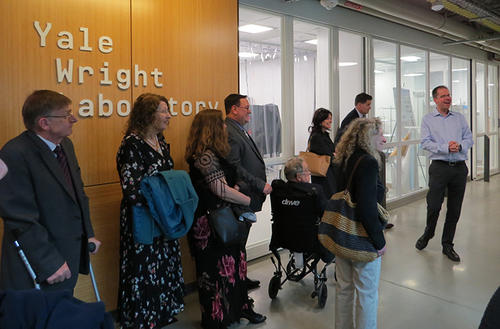 Fifteen members of the Yale Science and Engineering Association (YSEA) came to Wright Lab on Friday, April 12, 2019, for an extensive tour of Wright Lab.  Professor Karsten Heeger, the Wright Lab Director, led the tour of Wright Lab shops, clean rooms, instrument assembly areas and PI labs.  YSEA members were also able to see the Advanced Prototyping Center (tour led by James Nikkel) and two experiments housed at the lab:  HAYSTAC (led by Sidney Cahn), an experiment that searches for dark matter, and SIMPLE (led by David Moore), which optically levitates micron sized spheres (“microspheres”) in a laser beam in vacuum to search for physics beyond the Standard Model.

According to their website, the Yale Science and Engineering Association ”is one of the oldest university alumni organizations in the world with a focus on issues in science, technology, engineering, and mathematics (STEM). Our mission is to connect alumni with students, the University, and each other to strengthen the Yale science and engineering community.”