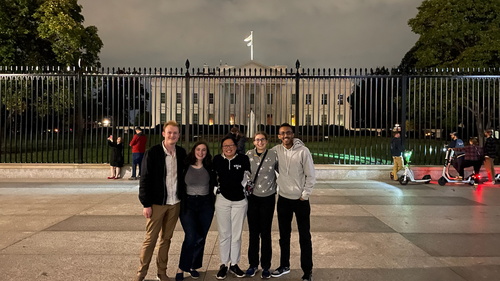 Six undergraduates from the Yale Physics Department–including Society of Physics Students (SPS) members Wyatt Kremer, Dawson Thomas, and Barkotel Zemenu and Women in Physics members Annie Giman, Sally Jiang, and Julia Levy–traveled to the 2022 Physics Congress (PhysCon) in Washington, D.C. Zemenu is a member of Yale’s Wright Lab, working in the Moore Lab, and Giman is a Wright Lab alum, previously having worked in the Maruyama group. The Physics Congress brings together physics students, alumni, and faculty members for three days of frontier physics, interactive professional development workshops, and networking. Hosted by Sigma Pi Sigma, the physics honor society, anyone interested in physics is invited to attend.

Jiang, Kremer, Thomas, and Zemenu presented posters.  Zemenu and Thomas were finalists in the poster competition.

Regarding the event, Thomas stated, “We attended guest lectures, panels, and workshops by world renowned physicists, and even got to explore D.C. a bit. One highlight was conducting an interview with former congressman Rush Holt about the place of physics in society, which we will be writing up soon. We have come back with ideas from chapters across the country about how to improve Yale SPS, and we cannot wait to implement them! … I [also] have group photos of us with Jocelyn Bell Burnell and Nobel Laureate Eric Cornell.”

See below for further information on PhysCon 2022, the Yale Society of Physics Students, Yale Women in Physics, and to a Flickr album of photos taken during the event by Dawson Thomas.