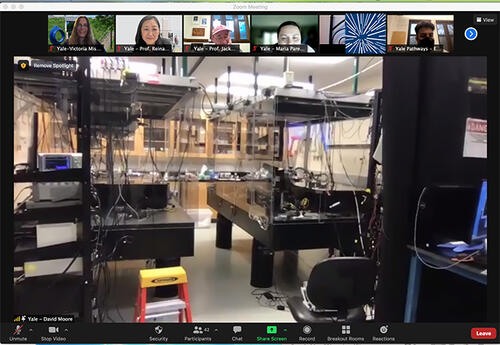 On Thursday, June 3, 36 local students from grades 6-12 and their families attended a Zoom event called Exploring the Invisible Universe:  Searching for Dark Matter at Yale’s Wright Lab.  The event was co-sponsored by Wright Lab and Yale Pathways to Science.

The event began with introductions by Maria Parente, Yale Pathways to Science program manager, and Victoria Misenti, Wright Lab program manager.  The three scientists then introduced the topic of dark matter in a panel together, moderated by Misenti.

After the introductions, Maruyama first spoke about her research in both dark matter and neutrinos, including the HAYSTAC experiment, which is located at Wright Lab and is searching for a dark matter candidate called axions; and the COSINE-100 experiment, which is located in South Korea and aims to directly detect a dark matter candidate called WIMPs.  Maruyama also showed some of the career paths scientists can take by showing some of the current jobs of alumni of her research group.

Second, Moore spoke directly from his laboratory space in Wright Lab, where he gave a brief tour of the SIMPLE experiment, which his group is using to search for dark mattter using mechanical sensors.

Throughout the program, students asked questions using the chat feature, which were answered by Harris, Maruyama, and Moore, and the questions and answers continued in a concluding Q&A session until the close of the event.