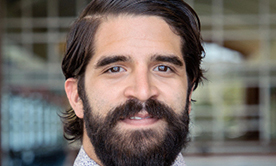 The purpose of the NSF MPS-Ascend program is to support postdoctoral fellows who will broaden the participation of groups that are underrepresented in MPS fields in the U.S. including Blacks or African Americans, Hispanics, Latinos, Native Americans, Alaska Natives, Native Hawaiians and other Native Pacific Islanders as future leaders in MPS fields. The program is intended to recognize beginning investigators of significant potential and provide them with experience in research that will broaden perspectives, facilitate interdisciplinary interactions, and help broadening participation within MPS fields. The program funds postdoctoral Fellows, for up to 36 months, in research environments that will have maximal impact on their future scientific development and facilitates their transition into a faculty appointment.

Flor is an experimental physicist interested in experimental heavy ion physics and nuclear phenomenology.  In his own words, “From the phenomenological side, I am currently interested in the use of Statistical Hadronization Models (SHMs) in the context of both predicting experimental hadronic yields in Relativistic Heavy Ion and Elementary Particle Collisions across a wide center-of-mass energy range, as well as determining freeze-out parameters – e.g. chemical freeze-out temperature and baryochemical potential – from experimental data from both the ALICE and STAR experiments. I have used the SHM approach to provide evidence for a flavor-dependent chemical freeze-out in the cross-over region of the QCD phase diagram via a two temperature framework capable of describing experimental data for light and strange hadrons. I aim to expand the two-temperature chemical freeze-out approach beyond the strange sector into the charm sector in order to provide further evidence of a flavor hierarchy at freeze-out. From the experimental side, I am interested in the detection and reconstruction of strange, multi-strange, charm, and multi-charm baryons produced in heavy ion and elementary particle collisions.”

“I was born in Mexico City and have lived a majority of my life in Texas. As a first-generation college student, I have an immense amount of passion and interest in promoting diverse and inclusive spaces in STEM – with a particular focus on underrepresented minority groups from low-income communities. In my spare time, I like to ride and race bicycles across different disciplines.”