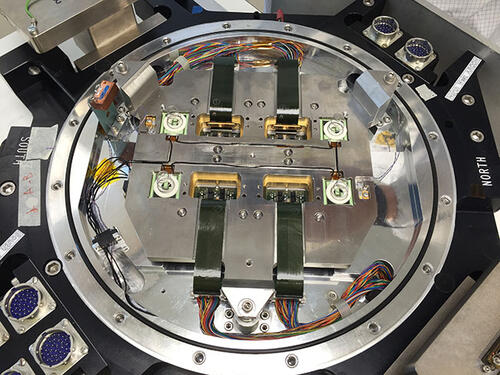 In 2015, Wright Lab researchers, including Charles Baltay, Eugene Higgins Professor of Physics and professor of astronomy; David Rabinowitz, senior research scientist in physics; William Emmett, senior mechanical engineer; and Tom Hurteau, Wright Lab research and development technician, were an integral part of the team that rebuilt and installed the Mosaic3 infrared CCD imager onto the Mayall 4-meter telescope at Kitt Peak National Observatory near Tucson, Arizona. This imager was installed to be used in the Mayall z-band Legacy Survey (MzLS), one of three legacy surveys intended to help identify galaxies to target with the then future Dark Energy Spectroscopic Instrument (DESI), which is designed to create a 3-D map of the sky that will allow researchers to measure the effects of dark energy on the expansion of the universe.

At the January 14th, 2021 meeting of the American Astronomical Society, the final data from these three surveys were released, including the largest ever 2-D map of the sky.  As planned, this map will be used to identify targets for a five-year survey with DESI.  DESI is currently being commissioned, and the first science data with DESI will be taken in April of this year.

For more information on the 2-D map and the DESI survey, please see the press release from NOIRLab.

The Wright Lab team also has been working on developing techniques and building parts to optimize DESI itself.  According to the DESI website from NOIRLab, “DESI will repeatedly map the distance to 35 million galaxies and 2.4 million quasars across one third of the area of the sky over its five-year run. In ideal conditions, DESI will cycle through a new set of 5000 galaxies every 20 minutes, or more than 100,000 galaxies a night. 5000 robotic positioners will automatically point DESI’s fiber-optic eyes at preselected sets of galaxies to measure their spectra, from which one can gauge how much the Universe expanded as the light from them traveled to Earth.”

Baltay, Rabinowitz, Emmet, and Hurteau designed, built and installed the Yale Fiberview Camera for DESI, which helps provide feedback for the robotic positioners so they can be preciscely positioned in a very short amount of time.  With changes of targets every 20 minutes, it is crucial that as little time be lost in moving to new targets as is possible, and the Yale Fiberview Camera enables the efficiency of the whole system.