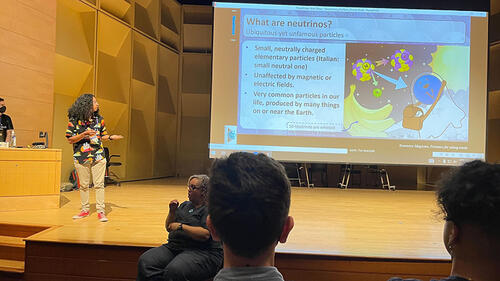 From July 16-26, 2022 members of the Wright Lab community attended and participated in the Snowmass Community Summer Study Workshop at the at the University of Washington in Seattle, WA. At the meeting, the particle physics community came together to identify and document a scientific vision for the future of particle physics.

According to the Snowmass 2022 website, the Seattle meeting was the culmination of the various workshops and Town Hall meetings that have taken place during 2020, 2021, and 2022 as part of Snowmass21, a yearlong study hosted by the Division of Particles and Fields (DPF) of the American Physical Society (APS), which takes place approximately every ten years. Its purpose is to define the most important questions for the field of particle physics and identify promising opportunities to address them.

Members of Wright Lab gave talks, convened workshop sessions, were panelists, and presented posters.  A full list is below.

Wright Lab postdoctoral associate Jorge Torres also won the Physics Slam competition at Snowmass.  During the competition, physicists shared entertaining explanations of some of the most exciting issues in physics today.