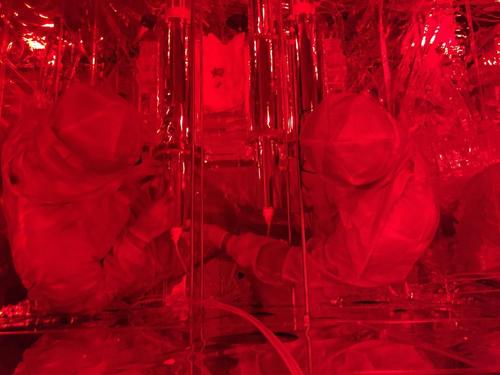 Wright Lab Professor Reina Maruyama  was awarded a continuing grant from the NSF for her research program to study dark matter, “Testing DAMA with the COSINE Experiment”.  A description of the program is below:

Astrophysical observations and cosmological data have led to the unambiguous conclusion that nearly a quarter of the Universe consists of dark matter. The search for dark matter addresses one of the fundamental questions in particle astrophysics. Current models predict that our galaxy is encased in a halo of dark matter. As the Sun orbits around the Milky Way Galaxy and the Earth around the Sun, we expect there to be an annual modulation in the flux of dark matter that passes through the Earth. Weakly interacting massive particles (WIMPs) and axions (which have been introduced to explain the smallness of the violation of the Charge-Parity (CP) symmetry in Quantum ChromoDynamics, the theory describing the action of the strong force) have been proposed as theoretically favored candidates for dark matter. Despite the strong evidence for the existence of dark matter, neither WIMPs nor axions have been conclusively detected. One experiment, DAMA/LIBRA, claims to have directly detected the expected annual modulation signal. Despite concerted efforts, no other experiment has detected WIMPs. COSINE-100 was designed, built, and started taking data in 2016 to test DAMA/LIBRA’s claim of detection of dark matter and provide a definitive resolution to the longest-standing controversy in the dark matter field.

An essential component will be to engage and educate students and postdocs in the proposed research. As a woman co-spokesperson of an international experimental collaboration, the PI has a unique opportunity to serve as a role model to the next generation of scientists. The program builds on the PI’s record of continued commitment to public outreach and education. The PI strives to maintain an inclusive environment in her group and is committed to recruiting and training future scientists from all racial and socioeconomic backgrounds, especially those from under-represented groups. The PI and members of her group will communicate the excitement of this science to the surrounding communities through outreach activities, leveraging outreach programs such as the Day of Instrumentation, Girls Science Investigations, and the Yale Pathway to Science, organized by the Yale University.

The sodium iodide detector technology was developed under the previous NSF grant, and follows the successful deployment and operation of DM-Ice17 together with IceCube at the South Pole. COSINE-100 uses the same target medium and detector technology as DAMA/LIBRA. The experiment consists of 106 kg of thallium-doped sodium-iodide crystals deployed at the Yangyang Underground Laboratory, operated by COSINE-100 collaborators at the Center for Underground Physics of the Institute for Basic Science in South Korea.