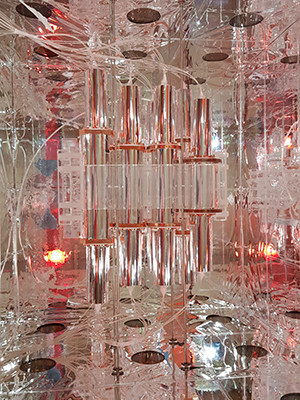 December 5, 2018
Wright Lab scientists are part of a new international experiment that challenges previous claims about the detection of non-luminous dark matter.

Astrophysical evidence suggests that the universe contains a large amount of non-luminous dark matter, yet no definite signal of it has been observed despite concerted efforts by many experimental groups. One exception to this is the long-debated claim by the DArk MAtter (DAMA) collaboration, which has reported positive observations of dark matter in its sodium-iodide detector array.

The new COSINE-100 experiment, based at an underground, dark-matter detector at the Yangyang Underground Laboratory in South Korea, has begun to explore DAMA’s claim. It is the first experiment sensitive enough to test DAMA and use the same target material of sodium iodide.

COSINE-100 has been recording data since 2016 and now has initial results that challenge the DAMA findings. Those findings are published online this week in the journal Nature.

“For the first time in 20 years, we have a chance to resolve the DAMA conundrum,” said Yale physics professor Reina Maruyama, who is co-spokesperson for COSINE-100 and co-author of the new study.

The first phase of COSINE-100’s work searches for dark matter by looking for an excess of signal over the expected background in the detector, with the right energy and characteristics. In this initial study, the researchers found no excess of signal in its data, putting DAMA’s annual modulation signal at odds with with results from other experiments. COSINE-100 scientists noted that it will take several years of data to fully confirm or refute DAMA’s results.

The COSINE-100 experiment uses eight low-background, thallium-doped sodium iodide crystals arranged in a 4-by-2 array, giving a total target mass of 106 kg. Each crystal is coupled by two photo sensors to measure the amount of energy deposited in the crystal.

The sodium iodide crystal assemblies are immersed in 2,200 L of light-emitting liquid, which allows for the identification and subsequent reduction of radioactive backgrounds observed by the crystals. The detector is contained within a nested arrangement of copper, lead, and plastic shielding components to reduce the background contribution from external radiation, as well as cosmic ray muons.

The COSINE-100 collaboration includes 50 scientists from the U.S., South Korea, the United Kingdom, Brazil, and Indonesia. The Yangyang Underground Laboratory, where the experiment is based, is operated by the Center for Underground Physics of the Institute for Basic Science (IBS) in South Korea.

“The initial results carve out a fair portion of the possible dark matter search region drawn by the DAMA signal. In other words, there is little room left for this claim to be from the dark matter interaction unless the dark matter model is significantly modified,” said Hyun Su Lee, the other co-spokesperson for COSINE-100, and an associate director of the Center for Underground Physics at IBS.

Maruyama is the Principal Investigator of COSINE-100, running the experiment from Wright Lab in the Yale Department of Physics.  Other members of the team at Wright Lab include postdoctoral associate Jay Hyun Jo, graduate students Estella Barbosa de Souza and William Thompson, and undergraduate students Elizabeth Ruddy and Daniel Heimsoth.  The unique infrastructure at Wright Lab supports both the research, development and testing for the COSINE-100 instrument and associated software and the comprehensive scientific analysis of the data produced by the experiment.

The experiment is supported by IBS and the National Science Foundation. Additional support comes from Yale University.

For more information about COSINE-100, visit Yale’s COSINE-100 website or the project website at the Institute for Basic Science.

This article has been adapted from a YaleNews release by Jim Shelton.