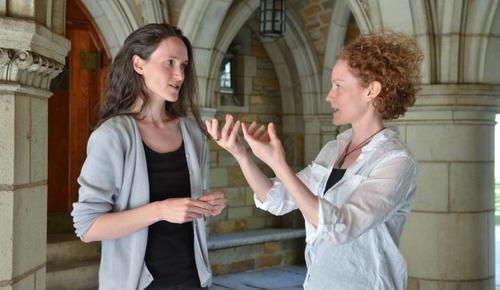 Wright Laboratory (Wright Lab) and the Yale Center for Collaborative Arts and Media (CCAM) co-hosted the first of the CCAM’s Wednesday Wisdom series on September 25, 2019.  The event featured Wright Lab’s Sarah Demers, Horace D. Taft associate professor of physics, and Emily Coates, associate professor adjunct of theater studies and drama and Wright Lab artist-in-residence,  who gave a talk on “Physics and Dance: “The Life of a Collaboration.”

Participants were first treated to a special “mocktail” created for the event by Caitlin Harder, CCAM program manager, which had an apple cider flavor and was called “The Aha! Moment” in honor of Isaac Newton’s famous experience witnessing an apple fall from a tree, which inspired his development of the law of universal gravitation.  There was also a chance to enter into a raffle by leaving one’s E-mail address.

After an introduction from Dana Karwas, the director of CCAM, the program opened with several demonstrations of the physics concept of resonance by Paul Noel, physics instructional support assistant, including: demonstrations of a vibrating string, a singing metal rod, and visually showing standing waves from sound being played made in sand poured on a Chladni plate.

Coates and Demers then began their presentation, describing the various science-art projects in different mediums that have been the fruits of their nine-year collaboration. They discussed how they have developed their manifesto for interdisciplinary research, which grounds their collaborative practice, and how each project has embodied their manifesto in different ways. Among other examples, they shared the visual imagery they had commissioned to illustrate dance and physics in their book, Physics and Dance (Yale University Press 2018).

During the presentation, five members of the audience were invited to join a choreographic study, in which the volunteers moved around the space, responding to prompts that created a seamless group flow.  This was followed by an explanation of choreographic complexity and an explanation of how this exercise is related to Newton’s Third Law of Motion, “for every action, there is an equal and opposite reaction”.

The presentation ended with a science video Coates and Demers developed in 2013, titled “Three Views of the Higgs and Dance,” in which physicists from CERN (the European Organization for Nuclear Research) discuss the discovery of the elusive Higgs boson particle with surprising kinesthetic flair.

After the question and answer period, Karwas chose five raffle winners.  Each one won a copy of Coates and Demers’ book, and the grand prize winner additionally won a private tour of Wright Lab.