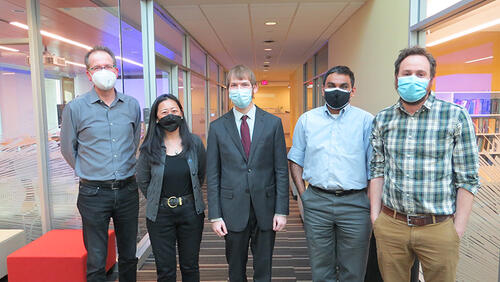 Thompson explained, “While there is a huge amount of evidence from cosmology that dark matter exists in the universe, it has not yet been definitely observed in a laboratory experiment. For the past two decades, one experiment, named DAMA, has observed a signal that is similar to that which would be expected from dark matter interactions. Interpretation of this signal as a discovery of dark matter is controversial, however, as it contradicts the results of many other dark matter searches within the context of commonly considered dark matter models. Of course, it’s possible that the issue here is with the dark matter models rather than DAMA’s discovery claim. My dissertation work focused on performing a model-independent test of DAMA’s claim by essentially replicating the their experiment with COSINE-100. In addition, I performed some smaller-scale experiments to measure the properties of the specific type of detector used in both DAMA and COSINE-100. The results of these experiments have important implications for COSINE-100 and will also help us build more sensitive dark matter detectors in the future.”

Thompson will soon be starting a new position as a postdoc with Carlos Arguelles at Harvard studying neutrinos with the IceCube experiment.

For more than two decades, the DAMA collaboration has claimed a direct discovery of dark matter. This claim comes in the form of an annual modulation in the event rate of a sodium iodide-based dark matter detector that has persisted for more than two decades. Currently, this modulation is observed at a significance of 12.9 σ. While such a discovery would be a milestone in physics, significant doubt has been cast on the validity of DAMA’s discovery claim, as it is in conflict with the null results reported by other direct detection experiments. Despite this tension, a direct test of DAMA’s claim has not previously been possible, as no other dark matter experiment utilized the same target material, sodium iodide. To resolve this stalemate in the field, the COSINE-100 collaboration is operating a NaI(Tl)-based dark matter detector to perform a definitive test of DAMA’s claim of dark matter discovery.

In this dissertation, we present new constraints on the annual modulation signal from a 173 kg·yr exposure with COSINE-100, acquired over the first 2.82 yr of data-taking. This new result features an improved event selection that allows for both lowering the energy threshold to 1 keV and a more precise time-dependent background model. In the 1–6 keV and 2–6 keV energy intervals, we observe best-fit values for the modulation amplitude of 0.0067±0.0042 and 0.0050±0.0047 counts/(day·kg·keV), respectively, with a phase fixed at 152.5 days.

In addition, we present the results of two enabling experiments for current and future NaI(Tl)-based dark matter searches. First, we detail results from a measurement of the sodium quenching factor across multiple NaI(Tl) detectors. We find no significant variation in the quenching factor between detectors, affirming the COSINE-100 and ANAIS-112 experiments as direct tests of DAMA’s dark matter discovery claim. We also report results from a measurement of the activation rate of cosmogenic radioisotopes in NaI(Tl) detectors performed using artificially activated detectors. The results of this measurement will enable the future deployment of lower-background NaI(Tl) dark matter detectors.