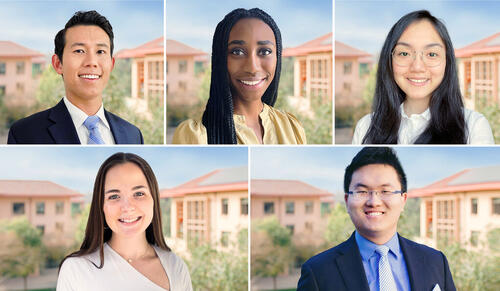 Jean Wang, double majoring in physics (intensive) and mathematics & philosophy, is among 70 students from around the world, including four Yale alumni, who have been named Knight-Hennessy Scholars at Stanford University. They have been selected based on demonstration of their independent thought, purposeful leadership, and civic-mindedness.

The Knight-Hennessy Scholars program cultivates and supports a multidisciplinary and multicultural community of graduate students and prepares them, through a collection of educational experiences, to address complex global challenges. The scholars participate in the King Global Leadership Program and receive up to three years of financial support to pursue a graduate degree program in any of Stanford’s seven graduate schools.

Jean Wang, who will graduate from Yale this month with a double major in physics and mathematics and philosophy, hopes to gain a theoretical understanding of quantum information sciences and apply it in furthering our knowledge of fundamental physics.

At Yale, she worked on quantum information theory with Steven Girvin and dark matter experimental research with Reina Maruyama  at Wright Lab. She also interned at the Max Plank Institute for Plasma Physics in Germany to develop numerical tools for stellarator optimization.

Wang served as president of Bulldogs Racing and built a Formula Hybrid electric race car with the Yale team. She has been a developmental editor for Distilled Periodical, an annual publication that features pieces on issues of societal relevance, co-founded the ReDirected Studies initiative to explore multicultural perspectives in the study of Western canonical works, and was a violinist in the Berkeley College Orchestra. She is from Shenzhen, China.

This article is adapted from the Yale News article of May 6, 2022 by Susan Gonzalez. See below for the full article.