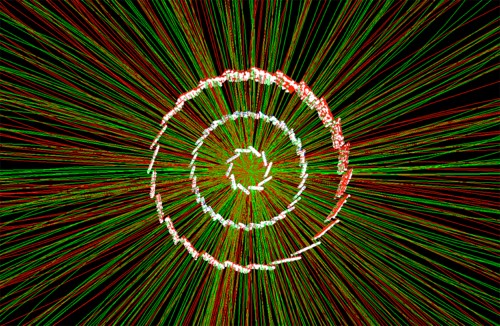 Wright Lab’s professor of physics Helen Caines is co-spokesperson of the STAR Collaboration, which has recently released a new result that may redefine how nuclear physicists understand hadronization, the process of how particles called quarks and gluons combine to form hadrons, which are composite particles made of two or three quarks.

Through energetic collisions of gold nuclei, the STAR detector, which is at the Relativistic Heavy Ion Collider (RHIC), located at the Department of Energy (DOE) Office of Science’s Brookhaven National Laboratory (BNL) on Long Island in Upton, New York, momentarily “melts” the boundaries between the individual protons and neutrons that make up the gold nuclei, so scientists can study how their inner building blocks, the quarks and gluons, recombine.

“By tracking the particles that stream out of RHIC’s collisions we can explore the mechanism of hadronization and how the strong nuclear force keeps quarks confined in ordinary matter,” said Caines

The recent experiment studied particles containing heavy “charm” quarks, which are easier to track than lighter particles, to see how the measurements matched up with predictions from different explanations of hadronization. The measurements, published in Physical Review Letters, revealed many more three-quark hadrons than would have been expected by a widely accepted explanation of hadronization known as fragmentation. The results suggest that, instead, quarks in the dense particle soup created at RHIC recombine more directly through a mechanism known as coalescence.

Read more in the original BNL press release, linked below.