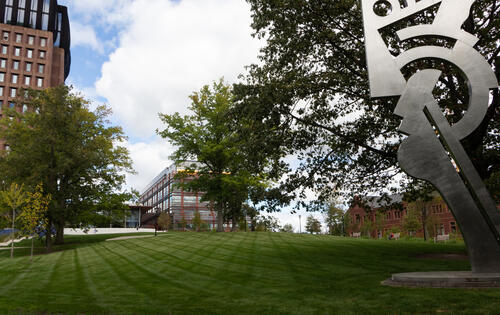 Preliminary planning has begun on the Physical Science and Engineering Building (PSEB), a new more-than-$350 million facility earmarked for completion in 2027 that will focus on initiatives in quantum and material science.

PSEB will be located north of Bass Center and east of the Class of 1954 Chemistry Research Building, near Wright Lab. The project was first announced in February of 2020, with construction set to begin by 2023 and a tentative completion date set for late 2026.

Karsten Heeger, professor of physics, director of Wright Lab and chair of the Yale Physics Department and Sohrab Ismail-Beigi, professor of applied physics, physics and mechanical engineering and materials science, are co-chairing a committee that is collaborating with architects to inform preliminary designs for the PSEB space.

“Thus far, the committee has discussed the intellectual vision for…PSEB, the laboratory and workspace specifications needed to support those visions, and how to build community around those visions,” Heeger and Ismail-Beigi wrote in a joint email to the Yale Daily News. “The work of the committee will inform an iterative design process over the next 18-24 months resulting in a comprehensive set of construction plans.”

Per their email, construction is set to begin in the early spring of 2023. Within the ongoing planning, however, students will likely see construction activity on Science Hill, as work begins on several enabling projects — buildings that need to be removed or built before construction on the main PSEB can begin.

The new facility includes a 253,000 square foot research laboratory building, a 48,000 square foot addition to Wright Laboratory and a 220-space parking garage. Yale signed a $365 million contract with Turner Construction Company, which announced in October that the project will focus on sustainability through a net-zero strategy.

“A net zero strategy in building design refers to the engineering features and operational modalities that minimize the building’s energy consumption,” Heeger and Ismail-Beigi wrote. “This is an ambitious goal for laboratory buildings, which have demanding energy needs, and is not addressed by a singular feature. Everything from the building’s mechanical controls to energy recovery equipment to how materials are sourced to the façade impact the strategy.”

In order to make space for PSEB, Heeger and Ismail-Beigi told the News that Wright Lab West and part of the Wright Lab Connector will be demolished. Programs that occupy parts of the two buildings will move to new laboratories that are set to be built during the first construction phase, planned for spring 2023, and before any building demolition.

According to Heeger and Ismail-Beigi, Wright Lab West and the Wright Lab Connector were constructed over 70 years ago and are currently being used for a much different purpose than they were originally designed for.

The co-chairs also noted that Wright Lab is set to continue its scientific program over the full duration of PSEB’s construction. While the impact on students will “vary depending on site location,” they wrote that any potential impacts will be minimized by moving operations into those newly-created laboratories.

This article is adapted from an article in the Yale Daily News by Sarah Cook and Anika Seth.   To read the full article, please click the link below.