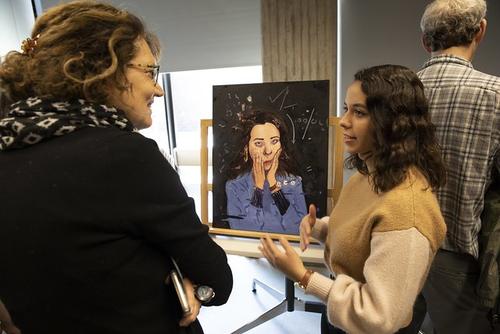 Fifteen first-year Yale University undergraduate students presented creative projects that fuse science and art in an exhibition at the Yale University Art Gallery (YUAG) on May 7, 2019. The projects are the culmination of a first-year seminar titled “Physics Meets the Arts,” a semester-long exploration of fundamental physics concepts through the visual and performing arts, designed and taught by Ágnes Mócsy, Yale Presidential Visiting Fellow and visiting professor in the Yale Department of Physics, in residence at Wright Laboratory for 2018-19.  More details about both the course and the showcase can be found, below.

The Physics Meets the Arts seminar took an innovative approach to teach fundamental physics concepts and cutting edge research topics through various forms of art including fine arts, poetry, film, music and the visual arts.  The students discovered innovative ways of seeing and understanding physics, the process of doing science, and who the practitioners are, as well as the sometimes unexpected, conceptual connections between physics and the arts, by engaging in the following course activities:

The class culminated in each student creating a “fusion project,” in which they chose a physics topic from the course, researched it further and then brought it alive through a medium of their choice, which ranged from paintings through sculptures, to ceramics, music, poetry and film.  The projects were presented in class on May 4 and judged by a panel of professionals both for physics and artistic merit.

On May 7, the students brought their fusion projects to YUAG for a public showing of their work from 1:30-3:00 p.m.   Nearly 100 people attended the event, which was held in YUAG’s Barker Welfare Foundation classroom and adjoining outdoor courtyard. The event was also the first time that a Yale student art exhibition was presented at the gallery.

After introductions by Mócsy, Simon, and Karsten Heeger, the Director of Wright Laboratory, which was co-sponsoring the event, each student was given the opportunity to present their work in turn to the audience with a brief presentation or performance, as appropriate.    Handouts of each work with pictures and a brief explanation provided by the student were also made available.  The presented projects were:

The participants and audience were also treated to a reception that included a cake decorated with the course’s special logo and sparkling cider.  At the end of the showcase, Mócsy and the course’s Teaching Fellow, physics postdoctoral associate Audrey Francisco, presented each student with a bound souvenir booklet, which was a collage prepared with a selection of text from the student’s own weekly contemplative questions and photographs documenting various aspects of the course.

Photographs from the event can be found on the Wright Lab Flickr page.

This program was jointly supported by the Yale University Art Gallery and Wright Laboratory.