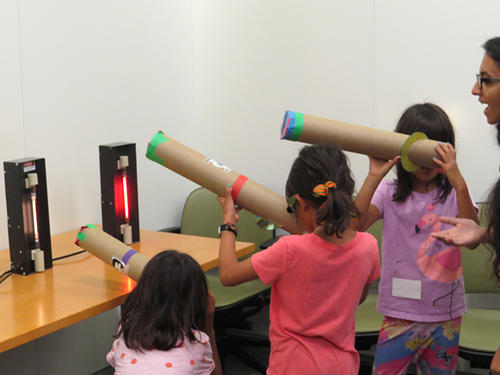 Twenty-one students and four counselors from the Yale Peabody Museum summer camp “Hidden Worlds” for grades 4-6 came to Wright Lab on July 31, 2019 for a facility tour and hands-on activities.

Wright Lab program manager Victoria Misenti first led the students on a general tour of the facility.  At the Advanced Prototyping Center (APC), associate director for instrumentation and education James Nikkel and postgraduate associate Arina Telles demonstrated the laser cutter and discussed how the machines in the APC were useful for scientists who are building their own research instruments.

Next, the group split into two and each group rotated through two hands-on activities:

Building instruments for experimentation - The structure of light:  Graduate student Sumita Ghosh led students in building and experimenting with their own compact disc (CD) spectrometer to see the varied structure of light given off from different kinds of sources.  Students in this workshop also experimented with an infrared (IR) video camera, which was projected onto a screen where they could see in real-time what they and their surroundings looked like in the IR.

The students also were treated the day before, July 30, to a visit from the Wright Lab associate director for operations Jeffery Ashenfelter who discussed Using scientific instruments - Detecting the invisible energy around us  and demonstrated the use of a Geiger counter to detect the natural radiation present in several common objects.

The “Hidden Worlds” camp ran from July 29 through August 2, 2019.  The description of the camp follows:

They say the world looks different depending on your lens. From microscopes to telescopes, scientific instruments have allowed us to observe and study what was previously invisible in the world. In this brand-new camp, you’ll delve into microscopic life, view sunspots, explore the inner workings of projectors, and construct a simple lens-based instrument. Our collection of historical scientific instruments provides unique insights into the humble beginnings of today’s most important scientific tools.

Photographs of the day can be found here on our Flickr page.