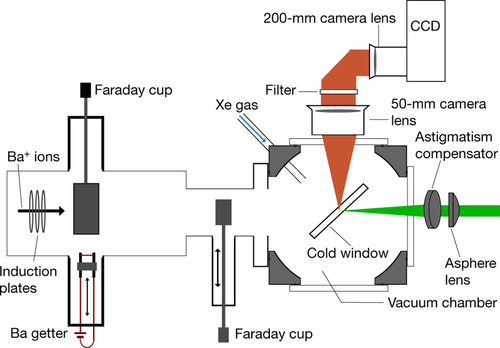 The nEXO collaboration, including Wright Lab professor David Moore’s research group, has successfully imaged and tagged a single barium atom in solid xenon (SXe).  According to the collaboration’s recent paper, Imaging individual barium atoms in solid xenon for barium tagging in nEXO, published in Nature, this is “the first time that single atoms have been imaged in a solid noble-element matrix”.  This result provides a key step towards using this technology to search for neutrinoless double beta decay, a process that has been theorized but not yet observed.

Because only double beta decay would produce barium in detectors employing xenon, identifying a barium atom at the location in the detector where a decay with the proper energy was observed would be a “smoking gun” signature that the decay had taken place.

The nEXO experiment will use xenon-136 to search for neutrinoless double beta decay. Barium tagging could be incorporated in an upgrade to nEXO, or an even larger future detector, to further extend its sensitivity to this extremely rare decay.

If neutrinoless double beta decay is observed, this will allow scientists to characterize the mysterious particles called neutrinos as Majorana particles-which means that neutrinos are their own antiparticles, measure the mass of the neutrino, and answer current questions about the standard model of physics.

The full article in Nature is linked below.