A milestone, and a new beginning, for Yale Physics ATLAS researchers 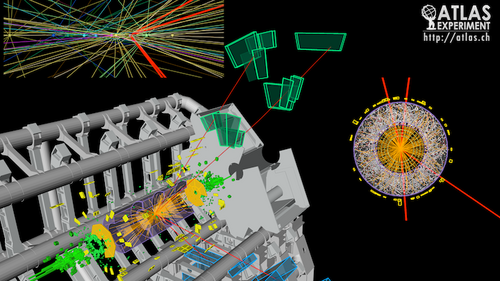 July 4, 2022 marked the 10th anniversary of the announcement during a seminar at CERN (the European Organization for Nuclear Research) that the discovery of a new fundamental particle (joining other fundamental particles, such as electrons and quarks), called a “Higgs boson,” was confirmed.   This discovery enables a search for new models of how scientists explain the physical world, and continuing studies of the Higgs boson are expected to lead to new scientific discoveries, including possibly the nature of dark matter.

For more information about the discovery, please see a Yale News video from April 2, 2013, where Tipton spoke on “Finding the Higgs Boson: What Your Taxes Taught Us About Mass”.

More recently, Demers appeared in a video this week for Physics World called “Birthday boson: 10 years of living with the Higgs particle,” where she recounts her recollections of the momentous day.

To add to the excitement, July 5, 2022 was the beginning of the third scientific run of the Large Hadron Collider at CERN, the instrument that discovered the Higgs Boson.  Baker, Demers, and Tipton are looking forward to investigating what secrets of the invisible Universe might be revealed in this next-generation run of the experiment. Demers has been interviewed several times this week about the initiation of the run, including:

Baker said, “When Galileo constructed his first telescope, he took a tool that was meant to be used to detect distant ships that are coming to attack, but he pointed it at the moon and he saw mountains.  It was a new tool that allowed us to do many things that we could not have done before in physics.”

Baker continued, “The Higgs Boson is also a new tool for physics.  It is unlike any other fundamental particle that we know in the entire universe and it may even be a portal to some new phenomena that is beyond the Standard Model of particle physics, which we call dark matter.  I use the Higgs to look for this new phenomena, which is why both the discovery of the Higgs ten years ago and the current run of the LHC are exciting to me.”