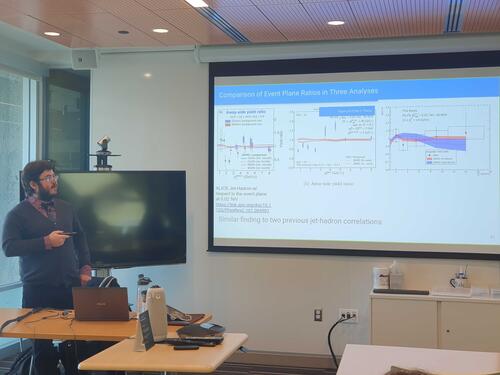 Oliver explained, “In the field of relativistic heavy ion collisions, the primary focus of research is into the quark-gluon plasma (QGP), an exotic state of matter formed at high densities and temperatures (trillions of degrees, any kind). In this state, quarks and gluons are not confined into protons and neutrons, but instead interact as a fluid sometimes called the “quark soup” (by hungry physicists). One direction in the field is to study how high energy quarks and gluons (which fragment into clusters of particles known as jets) can act as a probe of the fluid, not unlike how X-rays in a CT scan are used to probe the structures of the human body. In heavy-ion collisions that are not perfectly head-on, the geometric overlap of the colliding nuclei gives the QGP an initial approximately ellipsoid shape. As jets are predicted to lose energy as a function of the path-length they traverse in the medium, jets traversing the longer path through the medium should lose significantly more energy. My thesis investigates this by measuring correlations between particles from jets on opposite sides of heavy ion collisions, and testing if we can observe a difference in jet-QGP interactions due to a difference in path-length.”

Oliver will be staying on as a member of the Wright Lab heavy ion group as a post-doctoral associate for a short time to continue analyzing newer data and prepare a paper on his results for the ALICE collaboration.

Thesis abstract: In Ultra-Relativistic Heavy Ion collisions, such as those done at the Large Hadron Collider (LHC) and Relativistic Heavy Ion Collider (RHIC), the high energy densities create an exotic state of matter not seen since the first 10-4 seconds past the Big Bang, a Quark Gluon Plasma (QGP) where quarks and gluons are not confined into hadronic bound states.

The properties and evolution of this matter can be studied using a naturally existing probe: the hard QCD (Quantum Chromo-Dynamics) jets that are produced in partonic hard scatters at the beginning of the collisions. Similarly to the x-rays in medical Computed Tomography, the escaping jets reflect the transverse structure of the medium. However, this analogy breaks down in two key ways. The QGP, unlike the human body, is rapidly evolving on the same timescale of the jet’s passing through of the medium. Additionally, the interaction of the jet with the QGP is not fully understood and may modify the structure of jets beyond a simple attenuation. The field of studying these jet-medium interactions, called jet tomography, is advanced by the research in this thesis using correlations high momentum p0 mesons and hadrons arising from the same jet-producing hard scatter process. The focus in this study is on experimentally varying the path-length traversed by the involved jets by examining the correlations with respect to the reaction plane of the colliding ions. This is done using Pb-Pb collisions measured by ALICE detector at the LHC at √SNN = 5.02TeV.