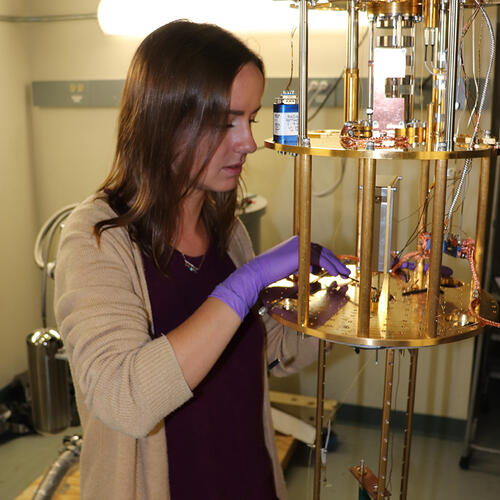 Backes explained “The question of the particulate nature of dark matter, the mysterious substance that comprises 85% of the universe’s matter density, has been puzzling physicists for decades. My thesis focuses on the search for a specific dark matter candidate, the axion. You can think of the axion not as a single particle but a sea of particles acting like a wave oscillating at a particular frequency. The axion field would interact with a large magnetic field provided by our experiment and produce a power excess within the detector. The axion-photon conversion is enhanced if the resonator at the heart of the detector is tuned to the same frequency as the oscillating axion field. This process is analogous to tuning a radio through many frequencies until you find a station that you like. The problem is we don’t know what the frequency of the axion is, and we have to scan over a huge range of frequencies! The rate that we scan is fundamentally limited by quantum noise. We can increase the scan rate by a factor of two using a technique called quantum squeezing which allows us to manipulate the quantum noise that the axion signal must compete with. The results presented in my thesis are only the second (after LIGO) to use quantum squeezing to enhance a search for fundamental physics. “

Backes will be joining MITRE Corporation as a Quantum Sensor and Security Specialist.

Thesis Abstract: Almost a century after the dark matter problem was first posed, dark matter’s expectedly minute experimental signature continues to elude direct detection and remains one of the most profound mysteries in fundamental physics. The QCD axion serves as a potential solution to the dark matter problem as well as an entirely unrelated problem in fundamental physics: the strong charge-parity (CP) problem of quantum chromodynamics. The detection of these dark matter axions is made difficult by their extremely feeble coupling to regular matter, specifically the photon. The axion-photon conversion power is dwarfed by quantum uncertainty, which manifests as a fundamental noise source limiting the measurement of the quadrature observables used for detection. A promising route to finding the axion is through the use of cutting-edge quantum measurement technologies. Specifically, quantum squeezed states have long held the potential to enhance searches for new fundamental physics by allowing an experiment to circumvent the standard quantum limit. This thesis reports on the first use of quantum squeezed states in a search for axion dark matter with the Haloscope at Yale Sensitive to Axion Cold dark matter (HAYSTAC) experiment. This technique doubles the search rate for axions by preparing a microwave-frequency electromagnetic field in a squeezed state and near-noiselessly reading out only the squeezed quadrature. The results presented in this thesis exclude axions within the 16.96-17.12 and 17.14-17.28 μ eV/c2 axion mass windows at a theoretically interesting level of sensitivity and demonstrate that delicate quantum technologies can be run effectively in the constrained environment of a particle physics detector. 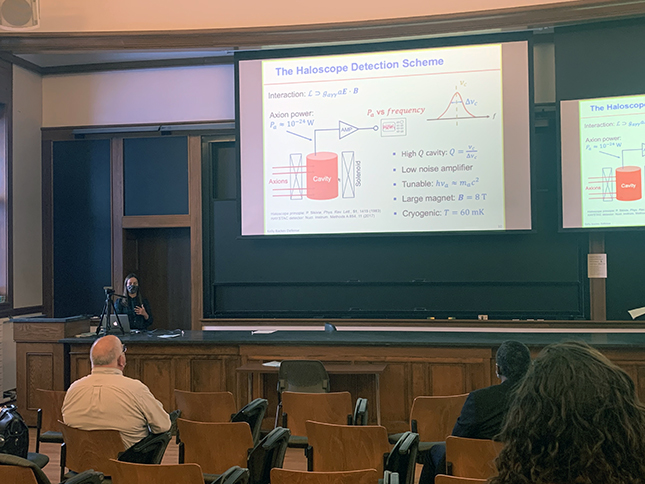