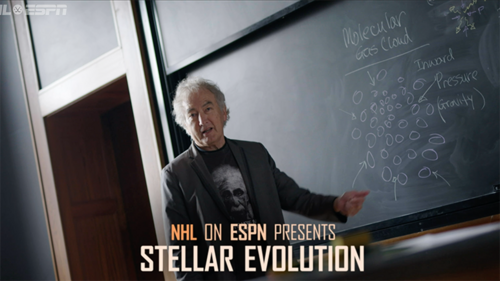 John Harris, D. Allan Bromley Professor Emeritus of Physics and a member of Yale’s Wright Lab, was featured in a segment for ESPN that aired on ABC on April 9, 2022 at the beginning of the broadcast of a National Hockey League game between the Pittsburgh Penguins and the Washington Capitals.  The segment was called “NHL on ESPN Presents Stellar Evolution”.

Dan Lindberg, ESPN’s Feature Producer said, “We like to find different and creative ways to set up the game broadcasts and tell stories about the teams involved.  These two teams have two of the greatest stars in the history of the NHL, so we… [arranged for]… Dr. Harris to do an interview about stellar evolution and the life cycle of a star”.