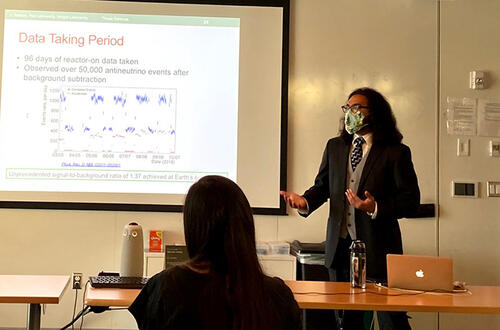 August 17, 2021
On August 13, 2021, Jeremy Gaison successfully defended the thesis “Measurement of the Reactor Antineutrino Spectrum of U-235 by PROSPECT and Daya Bay”. (Advisor: Karsten Heeger)
Gaison explained, “Nuclear reactors have historically been an important tool for probing antineutrino physics and continue to be so today. Several recent measurements of reactor-produced antineutrinos, however, have shown disagreements between measurements and model predictions. This could be explained by the existence of a theoretical “sterile” neutrino or by potential issues in the models themselves. To explore these possibilities, I helped design, construct, and operate the PROSPECT detector, which excluded the possibility of most sterile neutrinos and made the first modern precision measurement of the 235U antineutrino spectrum. My main thesis research then focused on combining that data with measurements from another reactor antineutrino experiment in China called Daya Bay. By leveraging complementary techniques from these two different experiments, I was able to produce improved data-based predictions for future reactor antineutrino experiments.”
This fall, Gaison will be starting a position at Pacific Northwest National Laboratory as a Linus Pauling Fellow, developing new techniques to measure the absolute neutrino mass scale.
Thesis Abstract: Since their experimental discovery over 60 years ago, neutrinos have proven to be a fascinating means of exploring the physical universe. Through a variety of both natural and man-made sources, physicists have discovered many unusual features about these particles from their oscillation between their different flavor states to their particularly small mass. There are still many questions to answer regarding these fundamental particles, though. Among these questions is whether a possible fourth type of neutrino exists, a sterile neutrino, which could resolve a range of discrepancies between recent measurements and predictions at a variety of different energies and baselines. Precision neutrino measurements may also help to solve questions in nuclear physics and resolve previously measured spectral distortions.

The PROSPECT experiment is a 4 ton, 6Li-loaded liquid scintillator detector at Oak Ridge National Laboratory operating >10m from the High Flux Isotope Reactor, a research reactor highly enriched in 235U. The segmented design of the detector allows for unprecedented background rejection at the Earth’s surface. Here I will describe the design, construction, data taking, and analysis of PROSPECT towards its measurement of over 50,000 neutrino events and the results from both its sterile neutrino search and its precision measurement of the 235U antineutrino spectrum. Further, I will describe the analysis that combines results from the PROSPECT and Daya Bay 235U measurements and present the most precise measurement of the 235U antineutrino energy spectrum to date.