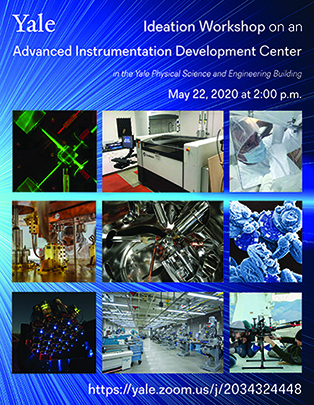 An Ideation Workshop on an Advanced Instrumentation Development Center (AIDC) in the Physical Sciences and Engineering Building (PSEB) was held on Zoom on May 22, 2020.   About 80 participants from across campus, including representatives from West Campus, the medical school, engineering, and basic sciences attended the meeting, which was led by the PSEB Instrumentation Initiative Task Force co-chairs Lisa D’Angelo and Karsten Heeger.  A full agenda for the workshop, including links to presentations, is available here.

D’Angelo and Heeger described opportunities being considered by the task force, presented a preliminary vision for an advanced instrumentation development center, and called for input from the community into what such a center can and should look like at Yale to enable cutting-edge research connecting to the science priorities of the University.

Strobel thanked the committee for its considerations and the community for getting involved in shaping the future of physical sciences and engineering at Yale.  He said that the University remains committed to this project and that, due to COVID-19, the timeline for the project is likely to be delayed a bit, but not so much that we should not continue the planning.  He said the work of the task force and the outcome of this event will have a direct impact on the building that gets built.  He encouraged the community to “keep at this, because this really matters”.

The eleven lightning talks highlighted connections between research from across campus, instrumentation development, and science priorities at Yale.  A full list of lightning talks and their slides can be found on the agenda page.

In concluding remarks, Crair thanked the workshop participants and noted the many ideas to consider.