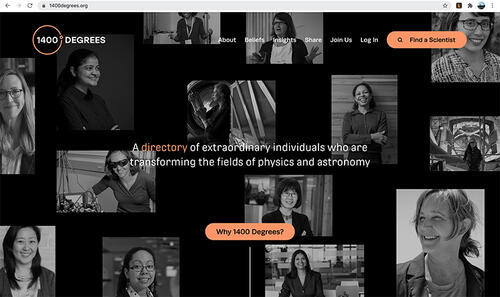 On June 1, the Heising-Simons Foundation announced the launch of the 1400 Degrees website, a robust directory highlighting the extraordinary achievements and contributions of women and marginalized gender identities to the fields of physics and astronomy.

The new directory includes Yale Physics professors Debra Fischer, Bonnie Fleming, and Reina Maruyama.  Photos of Maruyama and Fischer are featured prominently on the home page of the website, and Fleming is part of the Physics and Astronomy Leadership Council, whose vision led to the creation and design of the 1400 Degree platform.  Additionally, Fleming and Fischer have both received Heising-Simons Foundation support in the past.

In addition to a directory of scientists, the 1400 Degrees platform includes:

An excerpt from the Heising-Simons press release is below, further explaining the new initiative.

We know that only through diversity of thought, backgrounds, and lived experiences can we expect the kind of groundbreaking research that revolutionizes how we understand the universe.

A “glass ceiling” is often used to represent unseen barriers that prevent women, marginalized gender identities, and other underrepresented groups from excelling in society. 1400°C represents the temperature at which some types of glass begin to transform. The mission of 1400 Degrees lives right at that melting point, where the glass ceiling in physics and astronomy is transformed into a window of opportunity.

The platform is part of the Science program’s broader Women In Physics & Astronomy Initiative. All projects funded in this portfolio aim to create a more inclusive, robust, and innovative physics and astronomy community in U.S. universities and research bodies.

Learn more about this community of scientists, academics, and funders dedicated to advancing gender diversity in physics and astronomy at the 1400 Degrees website.