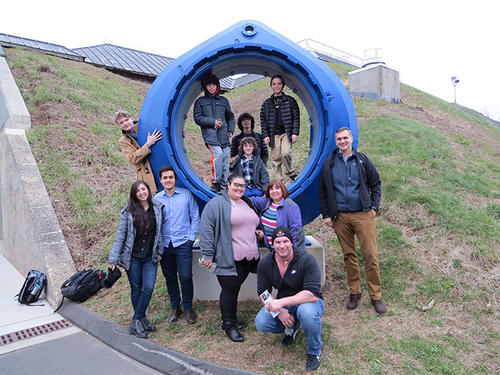 Seven students and four teachers from the FlexSchool New Haven visited Wright Lab on the afternoon of December 14, 2018 for a tour and various activities.

The event began with an introduction by Wright Lab graduate student Ako Jamil and continued with a tour of the lab’s facilities, led by postdoctoral associate Thomas Langford.  The participants then visited the Wright Lab research and teaching shops, where they observed demonstrations on the CNC machine by Craig Miller and on the lathe by Tom Hurteau.

Next, the group toured the lab where the HAYSTAC experiment is located and learned about the search for dark matter from graduate student Kelly Backes and undergraduate student Cady van Assendelft.

The group then split into two to rotate between a virtual reality tour of the ATLAS detector, led by graduate students Christian Weber and Michael Oliver,  and a tour of the SIMPLE experiment in Wright Lab, led by postdoc Fernando Monteiro  and graduate student Shilo Xia.

The group re-assembled at the end of the tour for a group picture.

Other volunteers who assisted with the visit were Wright Lab Program Manager Victoria Misenti and graduate student Sumita Ghosh.