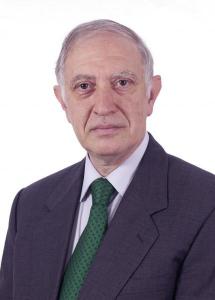 Professor Francesco Iachello, the J.W. Gibbs Professor of Physics and Professor of Chemistry, was honored by the Yale Faculty of Arts and Sciences on the occasion of his retirement.  The full text of the tribute is below.

Francesco Iachello, Doctorate of Nuclear Engineering, Polytechnic University of Turin, Ph.D. Massachusetts Institute of Technology, faculty member at Yale since 1978: You are a towering figure in the study of atomic nuclei, a world leader for over 40 years in their description in terms of symmetry and the mathematical techniques of group theory. Nuclei are tiny objects at the center of atoms containing up to hundreds of orbiting protons and neutrons. One would expect utter complexity. Yet, you and Akito Arima saw something different – the role of simple patterns in the data, reflecting the beauty of symmetry and the power of mathematical structures called Lie Algebras – and you developed the revolutionary Interacting Boson Model (IBM), describing nuclei in terms of their shapes and the oscillations of these shapes. This model has evolved to be one of the pillars of modern theories of nuclei – objects which comprise over 99% of the visible matter in the universe.

The influence of the IBM cannot be overstated: it led to worldwide activity to explore the model predictions and its extensions, and inspired the research of many experimentalists. You extended the model to nuclei with odd numbers of protons and/or neutrons, and to a groundbreaking model of nuclear supersymmetry. Later, you developed new and simple analytic descriptions of some of the most enigmatic nuclear phenomena - quantum phase transitions - describing the sudden shape changes that nuclei exhibit as their numbers of protons or neutrons change. More recently, you used the IBM to study a rare process of fundamental importance, neutrinoless double beta decay. The observation of this decay can clarify the nature of an elusive fundamental particle, the neutrino, and determine if it is its own antiparticle. Not content with this, you extended your love of symmetry to molecules, inventing the Vibron model and exploring the properties of simple and complex molecules alike, to the nucleonic constituents of nuclei themselves and to reaction and scattering processes.

At Yale, you mentored generations of young scientists, many of whom are now leading researchers worldwide. Your ability to explain subtle concepts with simplicity is legendary. Your books, in multiple fields, are classics defining those fields.

Of course, your legacy has not gone unnoticed. You are one of the world’s most cited nuclear physicists. You were honored with the Tom Bonner Prize, the highest U.S. award in nuclear physics, the Lise Meitner Prize, occupying a similar role in Europe, the Wigner Medal, and many other honors.

Amazingly, physics has not been your only forte. A modern renaissance man, you were a Formula One racer, are a lover and expert in art, classical music, and opera, and a purist on Italian cuisine, opposing some modern trends in its exported form, like prune and lobster pizza and cappuccino after dinner.  Your colleagues treasure your work, your legacy, and your friendship and offer you a ringing Grazie Mille.

Wright Laboratory will be hosting a symposium in honor of Iachello on October 5-6, 2018 called Symmetries and Order:  Algebraic Methods in Many Body Systems.