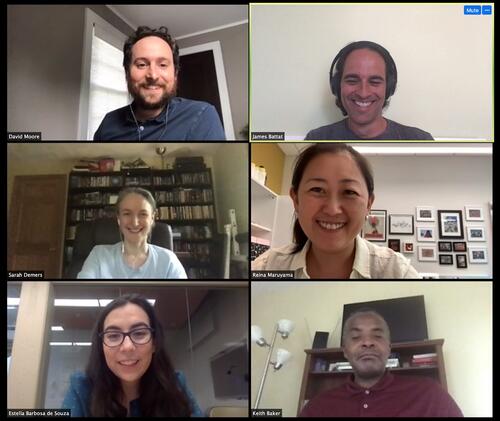 July 27, 2020
On July 24, 2020, Estella Barbosa de Souza successfully defended her thesis, “A Model Independent Search for Dark Matter Annual Modulation with COSINE-100” (advisor Reina Maruyama).
Barbosa de Souza explained, “Dark matter remains one of the greatest mysteries in physics. One experiment has claimed detection (DAMA), but the results go against that of other experiments. In my thesis I describe the COSINE-100 experiment and how it is testing the dark matter detection claim from DAMA, by searching for a dark matter-induced annual modulation. This work provides the most recent COSINE-100 dark matter annual modulation results.”
Barbosa de Souza will start a new position this month as a consultant at the Boston Consulting Group, in their New York City office.
Thesis abstract: There is overwhelming astrophysics evidence for the existence of dark matter. From galaxy rotation curves to the cosmic microwave background, we are able to study dark matter at different scales and investigate its role in the universe. Its nature, properties, and interactions with standard model particles are, however, still not well understood. Experiments have been searching for these elusive particles for decades, but there is no definitive direct detection yet. One group, the DAMA collaboration, has claimed a dark matter-induced annual modulation signal observation for two decades. Although their results are inconsistent with other dark matter experiments, there are still debates regarding their very significant detection of an annual modulating signal that matches the expected dark matter phase. In order to solve this standing question, one has to search for that signal in experiments with the same target material used by DAMA: NaI(Tl) crystals. The COSINE-100 experiment is located at the Yangyang Underground Laboratory, South Korea, and has been taking data since September 2016, with 106 kg of NaI(Tl) crystals, and searching for a signal similar to that observed by DAMA. This work will describe the experiment and its search for a model-independent dark matter-induced annual modulation to be able to compare the results to that of DAMA/LIBRA. It focuses on the understanding of the detector’s backgrounds and the application of these studies to the modeling of the detectors rate over time in the search for the annual modulation. The result presented is for a total exposure of 173 kg·year, with 61.4 kg of NaI(Tl) crystals and covering ∼3 modulation cycles.