Emma Castiglia successfully defends thesis, “Machine Learning for Tau Leptons and the Search for the Associated Production of a Higgs Boson with a Vector Boson, with the Higgs Boson Decaying to a Tau Pair at ATLAS” 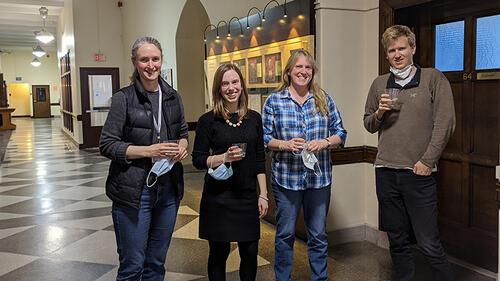 On March 11, 2022, Emma Castiglia successfully defended the thesis “Machine Learning for Tau Leptons and the Search for the Associated Production of a Higgs Boson with a Vector Boson, with the Higgs Boson Decaying to a Tau Pair at ATLAS”. (Advisor: Sarah Demers)

Castiglia explained, “My research focuses on machine learning applications for tau leptons and a search for a rare Higgs boson decay to a tau pair at the ATLAS experiment.    During my last 8 years on ATLAS, I have seen the importance and increasing prevalence of ML in our detector software and analyses. I worked on a regression algorithm that better estimates the energy associated with a tau particle in our detector and explored improvements to the tau identification algorithm using neural networks. Currently, the Higgs boson channel where the Higgs is produced in association with a W or Z boson and then decays into a pair of taus is poorly measured at ATLAS. We have the chance to observe this channel with data from Run 2. I optimized the kinematic selections for each of our four signal regions, trained a neural network to separate out one of our main backgrounds, and determined the background contribution from mis-identified jets in our signal region.  Due to the complicated nature of the backgrounds, this analysis is a great example of the power ML can have to improve signal sensitivity.  Measuring this channel will help complete the Standard Model description of the Higgs boson at ATLAS and it could be used for potential beyond the standard model searches involving Higgs to tau decays.”

Castiglia will soon start a position as a Research Data Scientist on the Privacy Team at Meta.

After the discovery of the Higgs boson in 2012, many particle physicists have focused on measuring its various production methods and decay modes. One channel that has previously only been measured at well below the observation threshold is the associated production of a Higgs boson with a vector boson, where the Higgs boson decays to a pair of taus. In this thesis, I describe an ongoing search for that channel using data from proton-proton collisions taken during Run 2 at the Large Hadron Collider with the ATLAS detector (2015-2018), with a recorded integrated luminosity of 139fb-1 at a center of mass energy $\sqrt{s}=13TeV. In the analysis, the W boson must decay to a light lepton (e/$\mu$) and a neutrino, while the Z boson is required to decay to a pair of electrons or muons. At least one of the taus from the Higgs boson must decay hadronically. The background from misidentified electrons, muons, and taus is modeled by a data-driven Fake Factor method. The remaining backgrounds are primarily from dibosons, and these are modeled with Monte Carlo simulation.

Machine learning has become an integral tool across many experiments in particle physics, including the ATLAS experiment. In this thesis, I describe how neural networks and decision trees are used to improve tau identification and the calibration of the tau energy, as well as ongoing studies for future improvements. Machine learning algorithms are also instrumental in separating out a complicated signal from a very similar background. In the Higgs boson analysis detailed in this thesis, the score from a neural network trained to target the diboson background is used as the final discriminating variable.