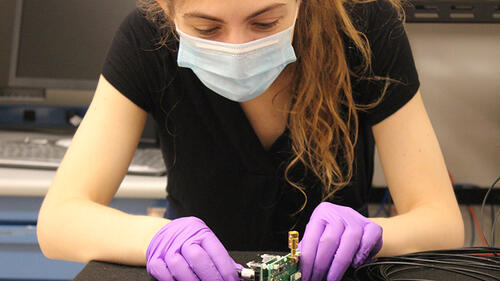 The U.S. Department of Energy’s (DOE) nuclear physics program is pursuing an international strategy to fund three tonne-scale experiments–CUPID, nEXO and LEGEND-1000–that are sensitive enough to search for evidence of neutrinoless double beta decay (0νββ).  Wright Lab researchers, including Yale Physics professors Karsten Heeger and Reina Maruyama, and assistant professor David Moore, are involved in leading and building two out of the three experiments that will define the future of the 0νββ effort – CUPID (Heeger and Maruyama) and nEXO (Moore).

The search for new physics with neutrinoless double beta decay

The widely accepted “standard model” of particle physics has a symmetry between matter and antimatter–whenever particles of matter are created in a laboratory, an equal number of antimatter particles are also created.  However, observations show the Universe is made of matter and not antimatter, so some process in the early universe must have violated this symmetry. The neutrino, a mysterious, ghostly particle that passes through most matter in the universe without being affected, yet still has mass, could lie at the heart of this mystery.

Wright Lab researchers are leading and building a variety of experiments to learn more about the neutrino. Among them, CUPID and nEXO are searching specifically for neutrinoless double beta decay, which is a yet unobserved nuclear process that would indicate new physics beyond the Standard Model of particle physics.

Detection of neutrinoless double beta decay would reveal whether the neutrino is its own antiparticle and demonstrate that neutrinos are so-called majorana particles. This would have implications for understanding the nature of neutrinos, how neutrinos acquire their masses, and how the small excess of matter over antimatter was generated in the early universe.

Heeger said, “The observation of neutrinoless double beta decay would be a definitive sign that neutrinos are their own antiparticles and indicate new physics beyond the standard model”.

If the neutrino is found to be a majorana particle, the standard model’s conserved principle of lepton number would be violated and could explain the observed matter/antimatter asymmetry in the Universe.

Maruyama said, “​​to find anything that breaks symmetries in particle interactions is exciting.”

Each of the three experiments in the DOE initiative is searching for neutrinoless double beta decay by studying the decays from one element to another element, but each is investigating a different isotope:  CUPID utilizes molybdenum (Mo-100), nEXO uses xenon (Xe-136), and LEGEND-1000 uses germanium (Ge-76).  The predecessor to CUPID, called CUORE, is searching for 0νββ in tellurium (Te-130).

Moore said that “there has been good support in the DOE for a multi-isotope approach since the 2015 Nuclear Science Advisory Committee (NSAC) report to search for neutrinoless double beta decay with different detector technologies and different isotopes.”  He continued, “Looking for half-life decay is hard and looking for it in multiple ways reduces the risks.  If we do see it in different detectors, we can be more certain we are seeing the signal we are looking for, even if we only see a few candidate decays in 10 years.”

CUPID is an upgrade to the Cryogenic Underground Laboratory for Rare Events (CUORE), the largest operating bolometric experiment, which is located at the Gran Sasso National Laboratory (LNGS) in Assergi, Italy.

CUPID utilizes and leverages the infrastructure and cryostat that CUORE has built over many years at LNGS, as well CUORE’s detector technology that has demonstrated outstanding ability to search for neutrinoless double beta decay.  The original CUORE experiment detects the heat (phonons) that result from energy deposition from either nuclear decay or particle interactions. CUPID will upgrade CUORE’s bolometric detectors by using scintillating crystals so that CUPID can additionally detect light (photons) as well as heat. This added feature will improve CUPID’s ability to discriminate backgrounds to the very rare signal.

CUPID’s bolometer technology also allows for flexibility in investigating a number of different isotopes.  The CUORE experiment used tellurium and CUPID will use molybdenum, but it is possible to use the same technology and infrastructure to look at other isotopes, should any others become of interest in the search for neutrinoless double beta decay.

Maruyama has been involved in CUORE since 2004 and Heeger joined in 2006.  The Wright Lab team was responsible for the design, construction, and commissioning of the CUORE Detector Calibration System; the analysis and simulation of CUORE data; and leadership of the collaboration.  Their efforts in CUPID build on the years-long experience with CUORE.  Currently, Heeger and Maruyama are Principal Investigators and Heeger is the scientific co-spokesperson of CUPID.

Maruyama is responsible for coordinating the effort to develop the thermal detectors, called neutron transmutation doped (NTD) thermistors, that read out the bolometers, along with collaborators from Berkeley and MIT.  The NTD thermistors are made by taking germanium wafers to nuclear reactors.  The neutrons that are generated in the reactors excite the germanium isotopes and turn them into gallium and arsenic.  The resulting germanium doped with gallium and arsenic can be used to turn the chips into a semiconductor that can detect the amount of vibration/phonons that are produced in the crystals of CUPID’s detector and measure the change in the temperature of the crystals, which is the main signal that the experiment is looking for.

Wright Lab graduate student Ridge Liu is working on the NTD thermistors and is looking at vibration data to characterize the performance of the thermistors and make sure that the experiment has the best possible energy resolution.

Wright Lab is also building the muon veto system for CUPID and is responsible for calibrations and the acoustic and vibration monitoring of the detector.  Cosmic-ray induced muons are shielded by the mountain surrounding the underground lab, but some do get through.  When they do, they can deposit energy that could be confused with the neutrinoless double beta decay events.  An extra layer of muon taggers is placed surrounding the main detector to further reduce this background.

Graduate students Samantha Pagan and Iris Ponce are both working on research and development (R&D) for the muon taggers.  Pagan is developing the physical plastic scintillator panels inlaid with frequency-shifting light fibers, while Ponce is working on the data acquisition system and light collection simulation.

nEXO will be a large detector that uses 5 tons of liquid Xenon (136Xe) in a radiopure time projection chamber (TPC), currently planned to be installed underground at SNOLAB in Sudbury, Ontario.  It is the successor to the EXO-200 experiment, which was a 200 kg  prototype at the Waste Isolation Pilot Plant (WIPP) in Carlsbad, NM that has demonstrated the potential effectiveness of the liquid noble gas technology for searching for neutrinoless double beta decay, and set some of the most stringent constraints on this process to date.

Due to nEXO’s large size and homogeneity, backgrounds originating from outside the detector will not reach its center, where an extremely low background rate will allow nEXO to see evidence for the decay even if it occurs with a half-life as long as 1028 years, making the detector substantially more sensitive to the neutrinoless double beta decay signals than EXO and other existing experiments.

Moore is the subsystem scientist for the nEXO photon detector, and the major responsibility of the group at Wright Lab is to build the photon detector for nEXO’s large array (4.5 square meters) of ultra low background silicon photomultipler photosensors that sense light emitted by the xenon.  The Wright Lab group is working very closely with scientists from Brookhaven National Lab, where the final photodetector system will be assembled and tested.