A Choreographer talks to a Cosmologist 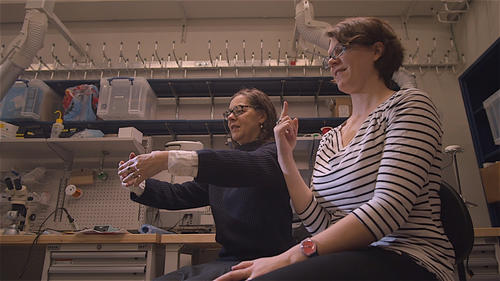 A film project, led by Wright Lab Artist-in-Residence Emily Coates, was featured in an E-mail blast from the Big Dance Theater on May 8, 2019.  See below for the text of the E-mail, written by dancer Annie-B Parson, as she muses about her encounter withWright Lab professor Laura Newburgh for the film.

“Annie-B participated in a film project that Emily Coates is creating while in residence at Yale’s Wright Laboratory, a physics lab in which scientists study the invisible universe. The project highlights interactions between distinguished dance artists and physicists, staged as a series of collaborative “duets” that take place on film. Annie-B’s partner was Laura Newburgh, an experimental cosmologist whose research charts the past 13 billion years of cosmic history.”

“I am looking out my window today as the snow comes down, and I am wondering what Laura sees when she looks out her window. I think about Laura a lot now because if dance making is about perception(s) of space/time/ motion expressed through the body, Laura’s business is about an exploration of the same issues—but applied not to the body– but the Universe. Laura Newburgh is a cosmologist, and Emily Coates invited me to Yale to speak to Laura as part of a film that Emily is directing about the interrelationships between the work of scientists and choreographers.”

“A cosmologist contemplates and measures and asks questions through math about the durational trajectory of the universe, so after a period of fretting about what I could possibly talk to Laura about, I created a list of words that I wondered if we shared. I broke the ice by asking Laura: Does symmetry exists in the galaxies? Laura responded by talking about math equations that describe the galaxies; she said that the equations themselves can be symmetrical. Then she smiled and laughed a lot, and said that they were beautiful—that is, the equations were beautiful.”

“As Emily is making a film about choreographers interacting with scientists, she, being Emily, of course, suggested that we make a dance– or at least that’s how I heard the prompt and Laura was game to move! So, after 45 minutes of brain-breaking, mind-blowing, synergistic conversation, we tried some movement together in her lab.  Laura studies the beginning and end of the universe, so I made some duet material about entrances and exits. After we danced together, which was a thrill, Laura went back to class. But my mind was full of questions.”

“I had asked her about chance, and proximity, about directionality, scale, edges, space and time, the meanings of shape; I asked about the role of her body in her work, even about the G-d issue… but so more many questions flooded my mind.  She used the word Math a lot, but I walked away wondering what Math is.  Is Math an expressive system like Dance is an expressive system, with seemingly endless possibilities to describe our world’s composition and ambiguities? I wonder what Laura would say to that.”