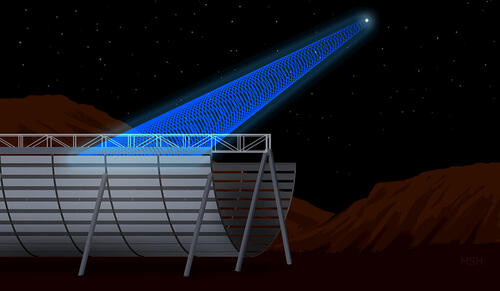 Wright Lab’s assistant professor of physics Laura Newburgh has collaborated with the Canadian Hydrogen Intensity Mapping Experiment (CHIME) since its beginning, and the CHIME collaboration has recently published an exciting result.

A new study in Nature reports the discovery of a fast radio burst (FRB) that pulses at regular intervals — every 16.35 days — from a nearby galaxy.

FRBs are extremely bright, fast radio emissions with more energy than what the Sun generates over many years. Researchers say their intensity indicates they are connected to highly energetic astrophysical events in their galaxy of origin, such as neutron stars or black holes, which are of great interest to scientists.

“Some FRBs are known to repeat, but only irregularly, with cadences ranging from seconds to days,” said Newburgh.  “This paper is the first evidence that some FRBs repeat regularly.”

Newburgh helped build the CHIME radio telescope, located in the mountains of British Columbia’s Okanagan Valley, in 2017, and leads a team that calibrates it.  The telescope has four cylindrical reflector dishes that cover an area equal to two football fields.