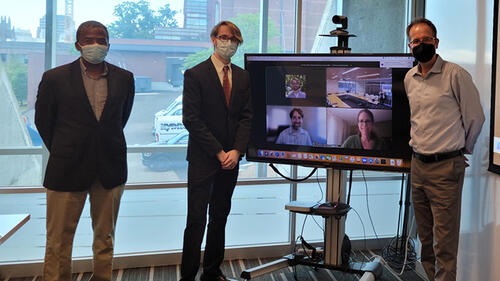 Foust explained, “My work studying the elementary neutrino particle has two goals: the search for a new type of neutrino, called a sterile neutrino, and the measurement of the electron antineutrino energy spectrum from Uranium-235 in nuclear reactors. Neutrinos are emitted at incredibly high rates from reactors but have an incredibly low chance to interact and be detected. With the PROSPECT experiment, we have built an innovative and compact detector that takes data from ~10 meters of a highly enriched Uranium research reactor. We have excluded the existence of a sterile neutrino with the preferred parameters at high confidence. Additionally, my thesis work has produced the highest precision measurement of neutrinos from this type of reactor to date. This type of work paves the way for potentially using precision neutrino detectors to monitor nuclear reactors, such as detecting the production of nuclear weapons.”

Foust will be joining the Detection Physics Group at Pacific Northwest National Laboratory in Richland, WA, as a postdoctoral researcher. While there, Foust will be working on the nEXO experiment, which aims to discover whether neutrinos are their own antiparticle, a discovery which could potentially explain the why there was more matter than antimatter after the Big Bang.

Neutrino experimentation is an important pathway to physics beyond the standard model, raising questions on how neutrinos obtain their vanishingly small but non-zero mass, what that mass is, and if they are their own antiparticle. Antineutrinos, as an abundant product of nuclear decay chains, are also important to advancing our understanding of nuclear physics and verifying nuclear databases.

In the field of reactor antineutrinos, there are two outstanding anomalies experiments are attempting to address. Previous antineutrino experiments at low enriched uranium power reactors have shown a global flux deficit at various baselines from reactors, hinting at a possible new type of neutrino called a sterile neutrino. Additionally, measured reactor neutrino spectra have a poor overall fit to theory, and observe an excess of events in the 4-6 MeV prompt energy range. Due to the existence of multiple isotopes present in the reactors, the source of the discrepancy is unclear. By making a precision spectrum measurement at a research reactor composed of highly enriched Uranium, the PROSPECT experiment helps clarify both of these anomalies. PROSPECT’s latest published spectrum result is composed of over 50000 candidate antineutrino events with a signal to background ratio greater than one. Future work with an improved spectrum measurement will further constrain antineutrino flux calculations and lead to a more refined eV-scale sterile neutrino prediction or exclusion.

In this thesis, I give an overview of the current state of reactor neutrino physics, the PROSPECT detector design and analysis, and recent results. I next discuss my work in making a joint analysis of the U-235 neutrino spectrum with the STEREO collaboration. This work finds good compatibility between the two experiments’ spectrum measurements. The prompt measurements are combined in a process called joint unfolding to remove the effects being contributed by the separate detectors and reactors. The resulting joint spectrum constitutes the most precise pure U-235 antineutrino measurement to date.

The PROSPECT experiment and this thesis work have made major strides in the search for sterile neutrinos and the source of the reactor antineutrino spectral shape discrepancy. Further, a path towards the resolution of both these anomalies is set with future efforts from the PROSPECT collaboration.