Impact of the Atom Film and Lecture Series: Richard Rhodes: Arsenals of Folly: The Parasitism of Nuclear Policy 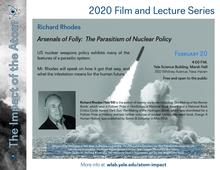 US nuclear weapons policy exhibits many of the features of a parasitic system. Mr. Rhodes will speak on how it got that way and what the infestation means for the human future.

Richard Rhodes (Yale’59) is the author of twenty-six books including The Making of the Atomic Bomb, which won a Pulitzer Prize in Nonfiction, a National Book Award and a National Book Critics Circle Award; Dark Sun: The Making of the Hydrogen Bomb, which was shortlisted for a Pulitzer Prize in History; and two further volumes of nuclear history. His latest book, Energy: A Human History, was published by Simon & Schuster in May 2018.

This lecture is presented as part of the Impact of the Atom Film & Lecture Series. It is offered free & open to the public.