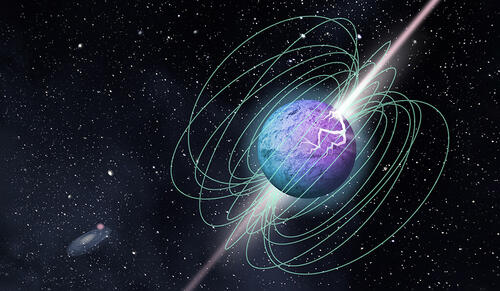 Wright Lab assistant professor Laura Newburgh has developed pioneering analysis and measurements that helped establish the brightness of a fast radio burst (FRB) emanating from a nearby magnetar located in the Milky Way.

FRBs are extremely bright, fast radio emissions that can release more energy in a fraction of a second than the Sun generates over many years. Astronomers discovered the existence of FRBs a decade ago and continue to debate the cause of the signals.

Newburgh is a co-author of a new study in the journal Nature, which finds that magnetars, a type of neutron star believed to have an extremely powerful magnetic field, could be the source of some FRBs.

“This is the first evidence of an astrophysical source for one FRB, tying it to a galactic neutron star with a large magnetic field and providing evidence that at least some FRBs are consistent with extragalactic magnetars, based on the brightness of this event,” said Newburgh.

This article has been adapted from a YaleNews “Research Roundup” article.