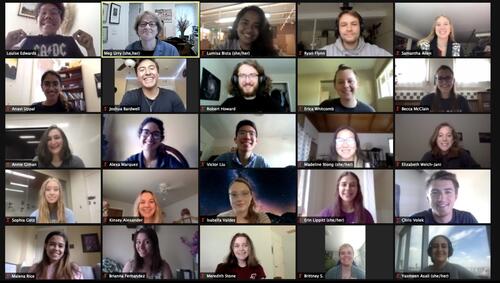 The third annual Granville Academy, a week of diversity, equity and inclusion workshops for undergraduate students doing summer research in astronomy and physics, was held online via Zoom from July 13 to 16, 2021.

Granville Academy was designed by Israel Munson professor of physics Meg Urry and former Yale lecturer Louise Edwards as part of their National Science Foundation program on the “Accretion History of Active Galactic Nuclei”.  In addition, astronomy graduate student Malena Rice joined the organizing team this year.  Granville Academy is co-hosted by the Yale Center for Astronomy and Astrophysics (YCAA),  Wright Laboratory  (Wright Lab) and the departments of astronomy and physics at Yale.

The workshops were led by Urry, Edwards and Rice, with an invited talk by Immanuel Williams, Professor of Statistics at Cal Poly SLO and Meyerhoff Scholars alumnus; and were attended by about 25 participants.

Urry said “our hope is that providing information to students about what kinds of obstacles they and their peers might encounter will prepare students to support one another and to counteract any negative pressures they might encounter.”  She added, “students reported learning a lot of helpful information, and said they appreciated the knowledge and support.”